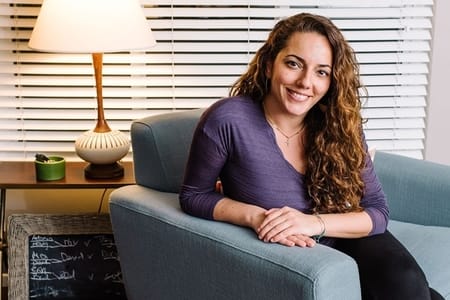 Have you ever heard the renowned name comedian, writer, and producer, Conan O'Brien? If yes, then you must be familiar with the name, Sona Movsesian who works as the assistance of Conan.

Sona Movsesian was born in Montebello to the Armenian parents as a single child. But the exact details regarding her birth date is still under the cover. As per some wiki, she celebrates her birthday on 13th October.

Sona Movsesian's partner, Artak or Tak Boroyan is the guy who brings happiness in the lives of Sona. He is a Graphic Designer, animator artist by profession.

There are barely any other information about her husband on the internet. As her husband doesn't like to be on a limelight.

Sona and her spouse Tak shared the wedding vows on 25th August 2018. The wedding was done in a typical American culture which was attended by their all friends and families members. After getting engaged with Tak, her marital relationship publicly opened on Instagram, sharing a photo of her spouse with his artwork.

“I am planning a big fat Armenian wedding with this guy”

Since their marriage, Movsesian and her love of life Artak are in a marital relationship for more than a year. Moreover, the couple often shares pictures via their respective social sites, including Instagram. On 20th August 2018, she shared a picture hugging her husband around the mountains and ocean.

At the wedding her employer Conan O'Brien enjoyed by dancing with other guests. To date, there are no rumors of extramarital affairs and divorce on both sides. Besides this, they have not yet welcomed their children.

Excellent Net Worth of Assistant

As of 2019, Sona Movsesian's net worth is expected to be around $1 million.  Well, Movsessian works with the award-winning comedian and television personality, Conan as an assistant for a long time, so she earns her excellent fortune.

Moreover, while looking for the mug of her American Gigolo, Sona exhibited her humorous nature. And Conan discovered the incidence so focusing that he was televising it. Since then, she has worked on many comedy shows and even traveled with O'Brien to Armenia.

On the other hand, Conan O'Brien's wealth is reported to be around $95 million throughout his career as a television host, producer, comedian, and writer. Further, he has an annual earnings of $12 million. Likewise, Conan is famous for hosting the late-night shows such as Conan, the Tonight Show with Conan O'Brien and  Late Night with Conan O’Brien.

Even though her roots are in Armenia, she grew up in San Gabriel Valley alongside her brother Danny. And Movesesian migrated from Turkey to the USA with her family.  She holds Armenian citizenship, whereas her ethnicity is not known.

As far as her education, she completed her high schooling in the USA. Later on, she graduated from the University of Southern California in Arts.

Sona instantly began working as an intern at NBC after graduation. She became the events and operations coordinator from January 2007 to January 2009 after working for a year on the NBC page.

Movsesian began working behind the camera at Conan O'Brien after leaving NBC news. Then, she immediately caught Conan's late-night show host's attention and promoted her to his official assistant.

For her work as Conan's assistant, it has been around a decade to date. She has appeared in about 17 episodes in Conan TV show and seven episodes of The Tonight Show with O'Brien.

To know more Biographies and Gossips about celebrities, stay tuned to Married Celeb!!!