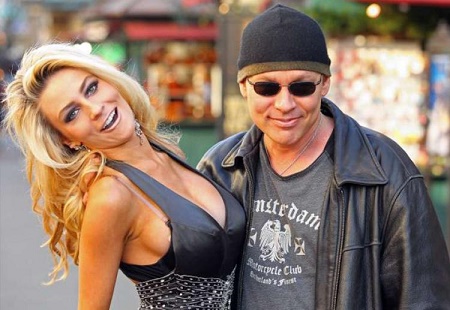 Courtney Stodden, 25 and Doug Hutchison, 59, are officially parted on March 3, 2020, after 10 years of marriage. The Celebrity Big Brother alum shared the news that she legally got divorced on Twitter Monday, writing, “I’m officially divorced today" with a butterfly emoji.

Courtney married Doug when she was just 16-years-old. After the divorce, Hutchinson says that marrying a teenage girl ended his Hollywood career. It, furthermore, left him broke but he does not have any regrets about the relationship. Want to know more about their relationship, then read along.

The reports suggest that Courtney and Doug have separated in February 2017 before three years after they called it quits as per TMZ. And in March 2018, 25, singer-songwriter, actually filed for divorce after more than six years of marriage and did not request spousal support as alimony.

After finalizing a divorce, Courtney Stodden even shared a lovely kissing picture with American character actor, Hutchinson on her Instagram post. She captioned on the post:

It’s March 3rd, 2020 - today I am officially divorced from actor Doug Hutchison. It’s an emotional day for me. God only knows how he’s feeling, but I can tell you that it’s for the better. I look back at this picture and feel absolutely taken advantage of.

Nevertheless, the former partners are filing new documents and telling the court that they have reached a settlement on the disposition of their assets. If a judge signs off once, the couple will be in March legally single.

Will there be any Settlements and Alimony?

In fact, the Love Addict star and her ex-partner, Dough are also dividing their all properties after disconnection. TMZ says that they are gonna splitting up their bank accounts by branch and life insurance policy in half. Similarly, Hutchison, 59, will reportedly keep 2001 Jeep Wrangler with his personal website with the worth $100.

As per the docs, Courtney further will be keeping all of their furniture and appliances, while Hutchison taking their Italian Greyhound.

Courtney Married as a Teenager!

Celebs Go Dating star first met her future husband Hutchison in 2010 through one of his online acting workshops. They got hitched with her parent's permission on May 20, 2011, in Las Vegas, when Courtney was just 16 and Doug was 50.

Similarly, the model suffered a miscarriage with the firstborn child of the couple in May 2016. And she said it deeply impacted the marriage.

Now, the divorced duo is officially done with each other. In fact, the American media personality Courtney discusses their conjugal relationship in an upcoming memoir, Flushing Hollywood: Fake News, Fake Boobs, which will be published on March 10.