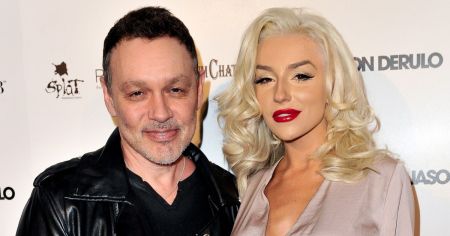 On 20th January 2020, the famous married couple of Hollywood, Doug Hutchison and Courtney Stodden are now divorced. The estranged pair stayed in a blissful marital relationship for less than a decade before facing a tragic divorce.

The couple had their first interaction on the Internet after Hutchison invited Courtney to his online acting class through a friend, who was Stodden's maternal aunt. After some time, he started dating her while Courtney was in her teenage period. The dating period lasted for more than four to six months.

The pair fell in love after their first meeting individually, and at that time, Hutchison became aware of their relationship that was 35years age gap. He also told that he spoke to Courtney's mother, Krista Stodden, to know what they think about their relationship.

If Stodden's parents didn't like their affair, the relationship might come to an end. Fortunately, Courtney's parents didn't decide their daughter's life and permitted her to make her own decision.

The soulmates then joined as husband and wife on 20th May 2011 in Las Vegas, Nevada. After their marriage, they faced several controversies and criticism, mostly describing their relationship as "pedophile" and "predator." Upon this, Doug's whole family abandoned him, his agent left his job, and many death threats started to thrill with his life.

As per sources, it was proclaimed that Stodden and Hutchison are separated after staying married for two and a half years on 1st November 2013. During an interview with Fox News, he said their 35years of age gap was the primary thing for their separation.

Following a year, the estranged pair again reconciled their marriage with some subsequent plans to resume their wedding vows in August 2014. After two years of reconciliation, they announced that they're going to welcome a baby on 17th May 2016. The baby saga came to a tragic end after three months when Stodden suffered a miscarriage.

After Stodden suffered a tragic miscarriage, they didn't hesitate to renew their wedding vows with a grand celebration of their fifthmarriage anniversary on 20th May 2016. Nevertheless, they, unfortunately, separated due to a lack of intimacy in January 2017.

In March 2018, Courtney filed a divorce agreement against Hutchison, appealing for no spousal support request. She then finalized their divorce by taking all of their home appliances and furniture as alimony.

Check out the interview with Courtney Stodden about her divorce with Don Hutchison!!!

Meanwhile, Hutchison took his pet dog, Dourtney, an Italian Greyhound breed, and a 2001Jeep Wrangler as his fortune, which currently costs $14,000 to $22,000. On 20th January 2020, Courtney also tweeted, "I'm Officially Divorced Today" on her Twitter account.

If You're Passionate About Celebrities' Intimate & Professional Highlights, Then Subscribe Married Celeb Below!!!