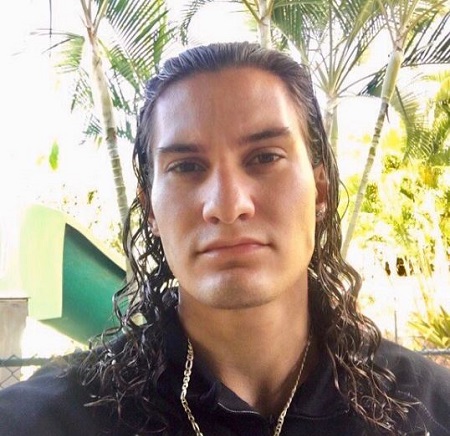 Dakota Chapman is an American reality TV star who is known for his appearances on his family reality TV show, Dog the Bounty Hunter on A&E Network. He is internationally recognised as the son of Leland Chapman and is the grandson of Duane Chapman.

Further, Dakota has made his first appearances on another reality TV program, Dog and Beth: On the Hunt on CMT. It was announced on May 21, 2013, but ended on January 12, 2016, after season three. In the article let's find out more about him.

Does Dakota Chapman have a Girlfriend?

The couple has been dating in mid-2018. On his Instagram post, Chapman posted the kissing photo with his another half for the first time on the beach on June 18, 2018. He wrote: "This woman right here is absolutely amazing I love everything about her".

Ever since the day, the two are flaunting their fortunate relationship with lots of respect and care. Now, they have completed their two years of togetherness. However, they have not revealed anything regarding their wedding plans at the moment.

He is a Dad Of Two Babies

Duane Chapman's grandson, Dakota and her beau Cheryl are doting parents of two sons. Though their first child details are unknown to the media, they keep sharing pictures with him on their social accounts.

On January 23, 2019, they welcomed their youngest son Asher Chapman. On his IG page, he shared the newly born picture saying: " My beautiful son... words can’t express how much I love you. your daddy loves you so so so much you have changed my world".

Now, the two sweet parents are enjoying their time in Hawaii with the kids. In addition, Dakota has just posted a family picture announcing the beginning of their family holidays wearing matching outfits.

Dakota Chapman has siblings named Leiah Breanna Chapman, and Cobie Chapman from his dad' relationship. Leiah is the daughter of Leland and Lynette Yi.

The forty-three years old Bounty Hunter is now living a happy life along with his wife Jamie Pilar Chapman. They exchanged wedding vows in the year 2016. They married in the very low key, so there are no pictures of their wedding ceremony.

Furthermore, the lovely couple is enjoying a happy and blissful marital life for three years. They currently reside in their lavish house in Hawaii.

Before Jamie, he was previously married to his first wife, Maui Chapman, for more than a decade. They tied their wedding knot in 1995. They had one son Cobie, born on 7 December 2000.

Like his dad and granddad, Dakota work as a certified bail agent in the bounty hunting business. As of 2020, his net worth is estimated at more than $300 thousand.

Meanwhile, his father, Leland Chapman has an impressive worth of $2 million. He has been working as a bail bondsman and bounty hunter for more than two decades. He earned $50,000 to $100,000 per episode from the A&E Network reality TV program Dog the Bounty Hunter.

His grandfather, Daune Chapman, has an estimated net worth of more than $6 Million. He has accumulated most of his net worth to this successful career of working in the Television Industry as a reality show star.

Dakota was born on March 24, 1995, in Hawaii to Leland and his high school girlfriend, Raina. So far, he holds American citizenship and is of white ethnicity.