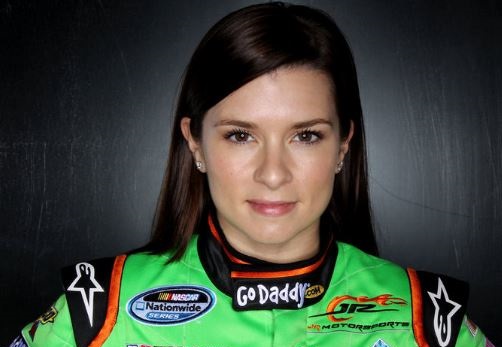 Danica Patrick is the most successful woman in the history of American Open Wheel racing. During the mid-1990s, she won World Karting Association Grand National Championship three times. Her dramatic win in the 2008 Indy Japan 300 is the only win by a woman in an IndyCar Series race.

Danica was born in Beloit, Wisconsin, the United States on 25th March 1982. She was raised by working-class family father, Terry Joseph Patrick Jr, and mother, Beverly Ann. The beautiful and talented has been Karting at the age of ten and achieved very early success by winning numerous titles.

As of 2019, the glamours racing driver is not single, she is in a relationship with her boyfriend, Aaron Rodgers. However, the pair has not engaged yet, but the pair are looking forward to taking their relationship further as soon as possible.

She even told to interviewer jokingly that, she will probably get proposed by Aaron tomorrow. Furthermore, the beautiful pair met each other 2-3 years ago and later officially got in the relationship since February 2018. Since then, social media were filled with lovey-dovey photos.

They started uploading each other's photos in their respective social media. Recently, her boyfriend even wished her Happy Birthday on his Instagram account. Their so much intense bonding surely makes clear that the pair are completely in love and are planning to take their relationship to the next level.

Leading women racing driver was previously married to physical therapist Paul Edward Hospenthal in 2005. She and Paul met back in 2002 at his office while she was recovering from a hip injury during a yoga session; she was a junior Formula driver at that time.

Seeking treatment for her injury, she met her first husband, Paul, at that moment. Although their age gap was more than 17 years, they began a romantic relationship and tied in a nuptial relationship.

Divorced and No Sharing of Children

Paul is very much keen in business. He has built his own personal training business and physical therapy in Scottsdale, Arizona, which treated high-profile professional athletes. Unfortunately, the pair relationship lasted for only seven years. In 2012, Patrick announced that she was getting a divorce through her Facebook page.

Later after one year, the pair officially get divorced and choose a separate path. They never share any children from their seven years of long marital life. As of now, the estranged couple is very good friends and often visit each other in their leisure even though being parted from each other.

Patrick became the most eligible bachelorette in NASCAR. Her beauty has to lead her to earn a reputation as a sex symbol and one of the desirable woman with racing fans. After the split with the physicist, she gets attached to her fellow race car driver, Ricky Stenhouse Jr.

The pair started dating since 2012 and were seemed very deep in their relationship. Being bounded in the commitment for five straight years, the pair finally called-off their relation in December 2017. The 32-years-old American professional race driver is currently single while Danica is in a faithful relationship with her NFL hero, Aaron.

Past Affairs of Boyfriend, Aaron

Just like other NFL quarterback Shedeur Sanders and Tom Brady, Aaron has also been sensational personality to NFL. The 36 years old footballer was previously in a very long-term relationship with actress Olivia Munn. The pair started dating each other back in 2014.

After enjoying three years of closeness, the pair broke up with each other in 2017. The reason behind their break-up is Olivia controlling nature towards Aaron. According to online sources, he has dated numerous women in his lifetime, which includes Kelly Rohrbach in April 2017, Jessica Szohr from 2011 to April 2014, and many more.

Net Worth of Danica Patrick in Millions

American former professional racing driver has a total fortune of whopping $60 Million. It is no strange that she has accumulated all of her fortunes through her outstanding career.

Even in her retirement, she stands out as one of the sport's most recognizable faces. According to Forbes, her annual salary while she was racing was approximately $7.2 Million, which includes engaging in various race-title and winning many of them.

As she is retired now, she earns an estimated $5 Million from deals and endorsements. Thanks to her talent, she made a name for herself outside of racing by being the spokesperson for GoDaddy. She was practically attached at the hip with the company from commercials to logos emblazoned on her car.

Furthermore, Danica is now living a very luxuriousness lifestyle and is very much focused on her health as she is seen doing yoga almost every day. He also owns a house in Scottsdale, Arizona which is spread around 8,300 square feet of disc-shaped walls and ceiling fixtures and is valued at millions and millions of dollars.

As a matter of fact, he bagged $40 Million as annual income back in 2013. Besides that, being one the best quarterback in the NFL, he has bagged a very good amount of paycheque through engaging in various commercials, endorsements, and advertisements. Currently, he holds a total fortune of $70 Million.

Houses and cars of Aaron

The multi-millionaire footballer is currently living a lavish lifestyle without a doubt. He owns a mansion at Del Mar, California, which worth is more than $10 Million as of 2019. The beautiful mansion includes a basketball court, football field, gym, five bathrooms, and four bedrooms, which is spread over 5,771 square feet.

Furthermore, he also has a home in Green Bay, which he bought at $442,500 back in 2005. Besides his lavish house, he also owns some of the expensive cars in the world, which includes Ford Mustang, which price is $1 Million at the market.

Similarly, he owns Mercedes-Benz Maybach Exelero which value is $8 Million in today's market. While his new Tesla's cost around $86,000. As of now, he earns around $25 Million annually.