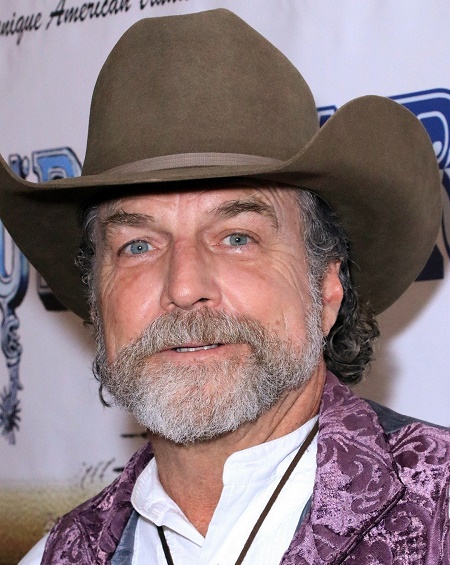 Darby Hinton is an American actor who is best recognized for playing the role of Fess Parker's son 'Israel Boone' on the action-adventure television series, Daniel Boone from 1964 to 1970. Throughout his career, he has played various roles in TV shows and films like Hawaii Five-O, Days of our Lives, The Fall Guy, Texas Rising, Mike Hammer, Hunter, and Magnum, P.I.

Edgar Raymond Darby Hinton was born on August 19th, 1957 in Santa Monica California United States. His dad Ed Hinton was an actor from Wilmington NC while his mother Marilynn Hinton was a school teacher from Chicago. Further, he has two older actresses sisters, Daryn Hinton, 65, and Darcy Hinton, 69. He holds American citizenship and is of white ethnicity.

What Is The Relationship Status Of Darby Hinton?

The 62 years old actor is a married man as of today. He is happily bonded with the love of his life, whose name is Shan Hinton. She is an interior designer.

In a private ceremony, the lovebirds tied their knot of husband and wife to their close friends and family. However, due to their privacy, there are no other details on their wedding in the media. As per the Instagram post of Shan, it is found out that they were married on September 4, 1993.

Recently, Darby who is a graduate of Pepperdine University and Shan has completed their 26th years of a marriage anniversary. Thus, for now, they've been enjoying their married life with no sign of divorce. In fact, the duo lives a happy life without controversies about their marital relationship.

How Many Children Does Darby Shares With his Wife, Shan?

Not only Darby, the 1.85 m tall and Shan are cherishing their marriage but also enjoying their parenthood as they share two children. Their firstborn is Ryder Hinton who was born in 1994 and the youngest one is India Hinton born in 1997.

Similarly, Hinton who attended the Emerson Junior High School also has two other kids from a previous marriage. They are Nick Hinton born in 1985 and Dakota Hinton born in 1988. But his first wife identity and marriage details still remain private.

Net Worth Of Darby Hinton

Darby Hinton who has employed in the entertainment industry for many years, has gained recognition and also a large amount of money. As of June 2020, he has an estimated net worth of $1 Million. He has accumulated that fortune throughout his decades of an acting career.

The average income of an American actor or performer is around $57060 as of 2020. Thus, he might be earning in a similar amount as an experienced and popular actor. Likewise, his film credits include Malibu Express, Firecracker, Wild Faith, The Return, and among others.

In addition, Hinton appears frequently on stage in plays such as The Manor and The Last Laugh, which may add to his wealth. Added to that, he made a guest appearance in the series Beverly Hills, 90210, where Brian Austin Green and Stephanie Bauer also featured.