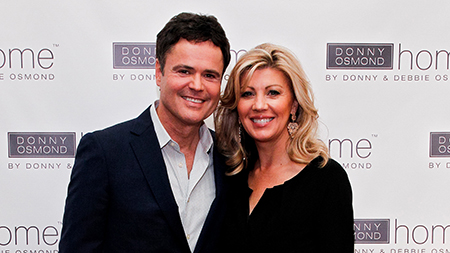 Debbie Osmond, aka Debra Glenn, is an American actress who is best known as the wife of singer-actor, Donny Osmond. She appeared in several movies, including the 1979 movie 'The Fir Tree' and 'Martha.'

Debbie was born on 26 February 1959 in Billings, Montana, The USA. Similarly, she is of white ethnicity and holds an American nationality.

The lovey-dovey couple, Debbie and Donny, tied the knot on 8 May 1978. Their wedding ceremony was held at the Salt Lake LDS Temple in Utah. As a matter of fact, Donny's father was against their marriage, but they marry each other.

As of 2019, they have completed their 41 years of successful marriage without any kind of separation rumors.

Donny shared pictures of him, and Debbie's from their wedding on his Instagram on 8 May 2019 with a caption, "Happy 41st anniversary to my sweetheart, Debbie. The best decision I ever made was to share my life and heart with you."

Previously, on 8 May 2016, Donny shared a picture on him and his wife on Facebook account. The picture was of him and Debbie celebrating their 38th anniversary at Sundance in The Tree Room.

On the post, he posted two pictures, one 40 years ago, when they were celebrating Debbie's birthday. And the second one on the same place after 4 decades.

Donny had the first encounter with his wife when she was only 15. During the time, she was interestingly dating her current husband's brother, Jay Osmond.

Donny later convinced her to be in a steady relationship with him after 3 years of hardship. And the rest is history.

The married couple is proud parents of their five children. Their first child, Donald Clark Osmond Jr., was born in 1979, and their second child, Jeremy James Osmond, was born in 1981.

They likewise gave birth to their third child, Brandon Michael Osmond, in 1985, fourth child, Christopher Glenn Osmond, in 1990 and fifth child, Joshua Davis Osmond, in 1998. As of now, they are the grandparents of eight children.

Their first son, Donald, is a businessman, who is currently working as a managing partner of OzComm Marketing. Regarding his personal life, he exchanged vows with Jessica Nelson Osmond.

Jeremy, the second son, similarly, is a physical therapist by profession. Like his brother, he is also a married man. He tied the knot to Melisa Osmond.

The couple's third kid, moreover, is Brandon who is a father of three kids. He shares his sons with his wife, Shelby Hansen Osmond.

The fourth son, Christopher, is also a married man who tied the knot to wife, Alta Osmond. Like, his sibling, Brandon, he is also a father to three adorable children. Similarly, the fifth child, Joshua, is the only bachelor in the house.

Staggering Amount Of Net Worth From Her Career

Debbie's net worth is around $1 Million, which is less than that of the actress, Marisa Ryan. Her primary source of earnings is her acting career. As per some sources, the average salary of an American actress is $50,000 per year.

Along with movies and TV series, the star also appeared on the dancing reality show, 'Dancing With The Stars.' She competed against the well-known actors, Mackenzie Ziegler and Frankie Muniz. Similarly, she makes an impressive amount to her net worth as the co-owner of Donny Osmond Home & Coaster Fine Furniture. Altogether, her yearly income might be over $150,000 for now.

On the other hand, her husband, Donny's net worth is around $18 Million, which he earned through his successful career as a singer and an actor. Not to mention, the couple is living a lavish lifestyle with all of their earnings and net worth.

Stay Tuned With Us: MarriedCeleb.