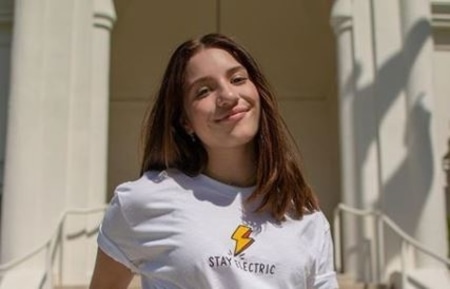 As we can see, young people from all over the world are hustling every day for popularity and prosperity. Mackenzie Ziegler is no different as she's showed her skills in singing, acting, and dancing.

Born on June 4, 2004, in Pennsylvania, USA to her parents Kurt Ziegler and Melissa Ziegler-Gisoni. The American actress is of white ethnicity and belongs to Gemini zodiac sign. Ziegler is currently dating as per her Instagram. Who's the boyfriend? Know more in the article below.

Is Mackenzie Ziegler married or single?

Young and multi-talented, Mackenzie stays secretive when it comes to her personal affairs. Likewise, another American singer, Ahren Stringer, whose personal information is a secret. Despite being a secretive person, her followers on social media can witness the daily updates on her life and relationship status.

Scrolling through her Instagram, we know that Mackenzie is in a relationship with Isaak Presley. Isaak is an American TV actor who also runs a YouTube channel with his name. According to the social media, the couple is dating each other for a long time now.

Recently, the duo went for ice skating along with their friend. In the photos, we can see the pair kissing each other and confronting their love to the world. Previously, Mackenzie was rumored to having an affair with another guy but as it stands it was just a false news.

How Much Is Mackenzie Ziegler Net Worth?

Mackenzie makes decent net worth from her career as a singer, actress, model, and her YouTube channel. With a various source of income, Ziegler's earnings is reported to be $600,000 every year.

Ziegler appeared in the show Dance Moms for six seasons. As per some sources, an average income of a cast in Dance Moms is $62,000 per season. Hence, we can assume Mackenzie earning from the show. As of 2019, Ziegler's total net worth is estimated to be $2 million.

Ziegler is an American actress, singer, dancer, and model. She is well known for her appearance in the Dance Moms with her mother Melissa Ziegler-Gisoni and sister Maddie Ziegler.

Mackenzie grew up along with her two brothers Tyler Ziegler and Ryan Ziegler and a sister. At the young age of six, Ziegler's father and mother divorced. Later in 2013, her mother Melissa married Greg Gisoni, from which she shares two brothers, Michele Gisoni, and Mathew Gisoni.

Ziegler had a keen interest in dancing since her early days and joined Abby Lee Dance Company. She also won titles in various dance competitions with that company. Talking about her education, Mackenzie was home-schooled.

After completing her studies, Mackenzie started her appearing in television shows. Ziegler first appeared in the Lifetime's reality show Dance Moms in 2016. However, she left the show after six weeks to work on other projects.

Additionally, Mackenzie and her sister appeared in other television shows like The Today Show and Good Morning America.

The fifteen-year-old actress, singer, and model Mackenzie stands at a height of 5 feet 2 inches / 1.57 meters and weighs around 54kg / 119lbs.

For further updates on Dancers, subscribe to Married Celeb!!!