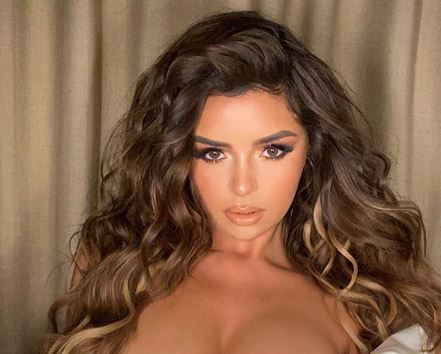 Nowadays many people are gaining name and fame by being engaged in various social media. Most of the people around the world are massively following a particular individual due to their hidden talents, singing style or their hot bodies. This next individual is Curvy model Demi Rose who has now conquered Instagram and is now a full-time model.

Demi was born in Birmingham and holds a British nationality. Full name Demi Rose Mawby started using Instagram since she was 18 and frequently found fame after posting a string of saucy selfies to social media.

The bold-beauty of Instagram is currently single. Recently she broke up with her DJ boyfriend and is very happy working on her career in the USA. Having a massive fan following all over the world, she is currently busy working as a full-time model and has played in various music videos of pop-stars like DJ Khaled, Chris Brown and many more.

Looking throughout her personal life and career, she is never married. Maybe the beauty queen is currently focused on her successful career rather than her love life. However, her fans are still wondering who is she currently dating.

Demi met Chris Martinez back in 2017 through social media. Both were so much deep in love after their first met. Having a very attractive body figure, it is said that Chris immediately falls for Demi. The pair's relationship went public in December 2017 after they were seen kissing at an airport in Madrid.

Chris even insists her to come to the US because she has a huge fan following in the US. The lovely pair often used to flirt each other on their social media account. However, the romantic relationship continues for two years and disclosed in mid-2019. The former couple had enjoyed a private romance primarily out of the limelight during their relationship days.

As for now, the ex-couple are focused on their individual career and are still continuing supporting each other throughout their careers. Demi even uploaded a stunning snap into her account where she captioned; Thinking of you. Though that messaged was not directly at Chris but in any case, the sizzling snap would certainly show him what he's been missing.

Past affairs and Other Relationship of Demi Rose

Demi has been engaged in a romantic relationship with many personalities throughout her years. The hot Diva of Instagram has dated some of the well-known personalities in the show business, let look at the some. The sizzling British beauty Demi dated Tyga back in 2016. The pair came to limelight after they were spotted together kissing and sharing love in the various public places.

All the rumored started after they were seen at Gotha nightclub in the exclusive French resort. However, their whirlwind romance quickly fizzled out in a matter of time. Demi even insisted that she wasn't heartbroken after their broke-up. She later stated that We really liked each other a lot but logistically it didn't work out. But you know what? everything happens for a reason.

Tyga previously dated Kylie Jenner who is the sister of Kanye West and Kim Kardashian while Demi was linked to DJ Tom Zanetti.

The Net Worth of Demi Rose

The 24 years-old social media influencers has a net worth over $2 Million. Being engaged in various music videos and modeling career she has accumulated her net worth throughout her stunning career. Having a successful career and many fans following she is surely paid a hefty amount of remuneration through her work.

Currently, she is earning more than $650,000 annually. Despite having a height of only 5ft and 2in, she is a well-known model in the show business due to her impressive body structure and her attitude towards her job. She is also involved in many brand endorsements; House of CB is one of them. Mose of her endorsed brand is likely to be of underwear and garments.

House, Fan Following and Other Success

Demi has been linked to various modeling sites throughout her career. She holds the cover photos on various news and magazine. Furthermore, she was dubbed the hottest new girl on the planet by Zoo Magazine and has appeared in X-rated editorials for Nuts, FHM and WorldStar HipHop.

In addition, she has a huge fan following on her social sites account which includes more than 11 million followers on her Instagram account and 586,000 followers in her Twitter account. Other Instagram Celebrities like JoJo Babie and Promise Phan has a fan following of 9.2 Million and 1.3 Million respectively. Currently, she is busy in her modeling career and is living a very lavish lifestyle without a doubt. Prior to finding fame, she used to live in a $310,000 family home in Birmingham.

Demi was raised by her supportive parents in the city of Birmingham. She attended stage school as a child and hopes that one day she might be able to have a Hollywood career, here she is now as one of the top models.

On June 12, she took her Instagram Stories to reveal that her supportive mother Christine had died at the age of 63. It was just eight months gap disaster for poor Demi because her father passed away on the third of October, 2018. She has rarely discussed her private life or bank manager dad, Barrie Mawby or mother Christine in the past.

But she shared a picture of her alongside with her father where she wrote. "RIP Dad you were the best father I could've ever wished for". The most caring, supportive, knowledgeable and loving man I've ever known. God bless you and thank you for everything. Hope to see you one day in heaven again.

The star-model surely has been sad from this back to back disaster but it has also encouraged her to achieve more and more successes throughout her career. Additionally, she is very familiar with the Spanish language and has a sister.

Dig in @ Married Celeb for more interesting biography and gossips.