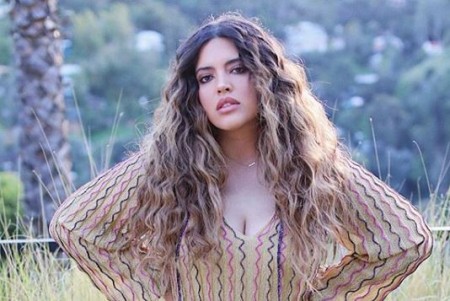 Denise Bidot, a Latina plus-size model, is an inspiration to thousands of women who suffer from body image issues. An accomplished model, Denise has worked with several high-profile brands such as Levi's, Old Navy, Forever 21, Zizzi Clothing, etc. Further, she became the first plus-size model to walk the runway during the 2014 New York Fashion Week.

Bidot has been featured on the cover pages of several magazines. Similarly, she has appeared on television shows such as Curvy Girls, Habla Women, Mama vs. Mama. Apart from her profession, Bidot is also known as the girlfriend of rapper, Lil Wayne.

Denise' mom was a Pageant Queen

Denise was born on June 13, 1986, in Miami, Florida, the United States. As of 2020, she is 34-years-old. Her parents are of different races; hence she belongs to Kuwaiti and Puerto Rican ancestry.

Denise's mother, Daphne Bidot, was a beauty pageant queen in her younger days. She moved to Miami at 25 and raised Denise as a single parent.

Denise as a Single Parent

Bidot has a busy schedule, and she often has to travel across the world. However, she is a mother who likes to spend as much time with her daughter, Joselyn Adams. Additionally, Joselyn and her mom walked together in a fashion show in September 2019.

Denise hasn't revealed much about Joselyn's father. As per sources, she was previously married in 2005 and welcomed her daughter in 2009. After separating from her husband, Denise raised Joselyn as a single parent. She is extremely close to Joselyn, and they can be seen together enjoying vacations on exotic places.

After being single for a long time, Denise reportedly introduced rapper Lil Wayne as her boyfriend. The couple first appeared in Denise's Instagram in June 2020. Before dating Denise, Wayne had just called off his engagement with another plus-size model, La’Tecia Thomas, in May 2020.

As of now, Denise and Wayne are happy in their relationship. They might soon exchange their wedding vows in the coming days.

Denise's boyfriend, Lil Wayne (Dwayne Michael Carter Jr.), is said to be one of the influential hip hop artists and rappers. He is also one of the world's best-selling artists who has won five Grammy Awards.

Wayne has four children from different relationships. He was first married to reality star and his high school sweetheart, Toya Johnson. Likewise, Wayne was previously in a relationship with Sarah Vivan, Lauren London, Nivea, and Christina Milian.

How much is Denise Bidot's Net Worth?

The 5 feet 11-inches tall model, Denise Bidot, has a net worth of $400,000. She is a world-renowned plus-size model just like Ashley Graham. Denise has worked with multiple brands and agencies. She has also walked for prestigious runway shows. Her annual salary ranges somewhere between $80,000-$120,000.

Denise earns a substantial amount of money from sponsorships and product promotions. Likewise, she has merchandise where she sells various accessories. In 2016, she launched a lifestyle movement called, There is No Wrong Way to Be a Woman. On her social media, Bidot shares her latest updates, such as her partnership with Olay. Hence, she lives a lavish lifestyle.