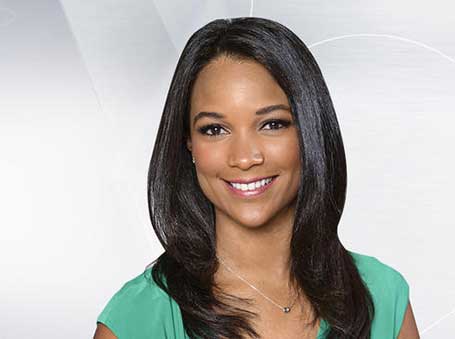 Bilingual meteorologist, Denise Issac is currently serving as the reporter for WXYZ since 2017. She is always fascinated with weather forecasting, which leads Issac to serve her career in meteorology, covering live events from different parts of the world.

Born and raised in Colon, Republic of Panama, Denise holds Panamanian nationality and belongs to the Hispanic ethnicity/race. To know more about Issac's personal life, stay tuned with us!

The 31-years-old meteorologist is happily married to her husband, Mike. She often mentioned her husband on her social media posts but never really talked in the media nor revealed any further information about him.

Back in January 2018, Issac participated in the Oakland country version of Dancing with the stars while she was 38 weeks pregnant. Later, she took her Facebook to thank her husband for supporting her crazy ideas. Denise also added she and her spouse had their hospital bag ready just in case her water breaks while performing.

Additionally, Issac mentioned she loved watching football and rooting on Seminoles with her husband and daughter on her NBC employee's information page.

Blessed with a Baby Girl

Panama's native meteorologist shares a beautiful daughter with her husband. The duo welcomed their first child, Emilie, on February 2, 2018, weighing 8 lbs. Issac took her Instagram to share the good news among her fans and followers.

Denise is a proud mother to her only girl, and despite being a working woman, she never left her daughter alone, she took her wherever she went. Further, she has set a perfect example of a working mother who equally balances her work and family.

Issac hesitates to shares her husband's pictures but not her daughter, scrolling through her Instagram, most of her posts are dedicated to Emilie. It isn't wrong to say; all her Insta posts are filled with the adorable pictures of her baby.

Denise Issac has a net worth of $500,000, considering her career graph. Currently, she works at WXYZ Channel 7 Detroit as a meteorologist, and the average salary of a meteorologist in greater Detriot area is $64,000, so she might earn the same figure. Some other meteorologists like Melissa Mack and Chelsea Ambriz make a hefty sum of amount from their career.

Isaac has a special announcement back in 2017, check out the video,

Previously, Issac worked for WSCV as the lead morning meteorologist for the national show Un Nuevo Dia. Usually, the employees of WSCV earn between $27,000-$70,000 per annum. She then worked for Telemundo 51 as a host of Good Morning Miami. More to that, she also worked on A New day.

Issac is an avid animal lover and never misses a chance to help and support animal rights. Previously, she volunteered for the 'Animal Shelter of Broward Country," and in 2013, she, along with other celebrities, were invited for the "Paws for Art" event of "Human Society of Miami."

The meteorologist won the 2014 Emmy award for the best morning program, which added extra feathers on her journalism career. She is also one of the acclaimed members of the "American Meteorological Society."