Did End of Days Predicted Coronavirus? 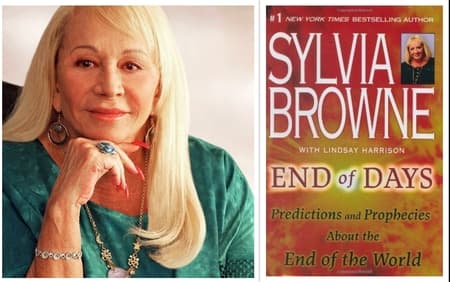 Psychic Sylvia Browne's 2008 book End of Days: Predictions and Prophecies about the End of the World is creating a lot of buzzes these days. But Why? Well, the buzz has all to do with the bold predictions, Sylvia made in 2008.

The book is also co-authored by Lindsay Harrison. In her book, End of Days, Browne wrote,

"In around 2020 a severe pneumonia like illness will spread throughout the globe, attacking the lungs and the bronchial tubes and resisting all known treatments".

The passage does not just stop here. In the following statements, Sylvia writes,

"Almost more baffling than the illness itself will be the fact that it will suddenly vanish as quickly as it has arrived, attack again 10 years later, and then disappear completely".

Since first appearing in Wuhan Province of China, the COVID-19 has killed 14,749 as of the writing of this article. Out of a total of 341,631 infected people, 99,041 have recovered. Among the infected celebrities like Debi Mazar and Tom Hanks are also included.

The book End of Days sales went viral in Amazon in the UK and the USA. It became the top 10 Kindle e-books as well after Kim Kardashian West shared the exact extract from the book which was published in July 2008.

In the book, the author answers the events happening in the next 50 years. From Religious wars, global terrorism, pandemics, and genocide, if you want to know what will unfold in the final hours, then this is the book to read.

End of Days Other Predictions! Did it come true?

During her lifetime, Psychic Sylvia Browne penned around 40 books. In most of her predictions, she was correct while Browne was wrong in many of her other predictions as well.

Browne who passed away in 2013, predicted the end of the US presidency in 2020. In the book, she claimed that the Americans will be fed up with the executive branch of the government and it would shut down.

By 2014, people would have microchips in their brains to fight mental health issues is another prediction of the book, which of course did not come true. Some of her other outlandish predictions are Atlantis and Lemuria will rise from underwater by 2050, there will be Meteor showers and space trash on Earth by 2029.

Additionally, the author claims that old diseases such as smallpox and polio will return around 2075 and 2080. Humans will die because of disease-related issues and it will be peaceful. Similar to these there are many predictions made by the late Psychic regarding the end of the world and human civilization.

Whose Predictions match with Sylvia's End of Days?

As the extract from the 2008 book has sparked imagination among the readers and social media users, many are also tweeting, commenting about other personalities predicting COVID-19.

After the massive virus outbreak, many people started posting different predictions that many made in the past about Coronavirus. Some conspiracy theorists claims, Nostradamus a 16th-century prophet claimed about the virus.

Similar to End of Days, many say the Christian Bible also predicts the same thing. Not just that, one said author Dean Kroontz predicted Coronavirus disease in his 1981 novel. In his novel The Eyes of Darkness, Dean referred the COVID-19 as Wuhan-400.

Besides these predictions, many nations are under lock-down and people are living in isolation. Health officials, Government organizations, and WHO are all working together to make this disease disappear as soon as possible.