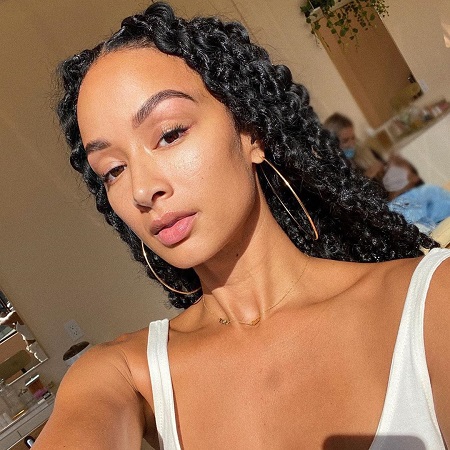 Draya Michele is an American television media personality, model, and fashion designer who joined the VH1 series Basketball Wives LA in 2011 as a cast member. However, she initially gained worldwide recognition being the girlfriend of notable Singer-songwriter, Chris Brown. Further, she has appeared in music videos including Nicki Minaj, Kanye West, The Game, and Jay-Z.

Andraya Michele Howard was born on January 23, 1985, in Reading, Pennsylvania, United States. Her mother's name is Valeria Diaz while her father's identity is not known to the media. So far, she holds American citizenship and belongs to the African-American and Italian ethnicity.

Was Engaged to With Ex-Fiance, Orlando Scandrick

As of now, the businesswoman, Draya, is officially a single lady. Also, she has been focusing on her business and staying positive. But she was previously engaged to American football cornerback Orlando Scandrick, with whom she shares one kid.

The ex-fiance first met while filming Basketball Wives LA and started dating in around 2013. After shortly, they had experienced their first split after dating for around two years in May 2015. After a month, they reconciled and became engaged in the year 2015. The NFL star proposed his girlfriend turned fiance with a $400,000 diamond ring.

In January 2016, the reality star and Orlando announced that they were expecting their first child together. They welcomed their bundle of joy or son Jru Scandrick, in the same year. In fact, Draya has one son named Kniko Howard from her past love affair while Scandrick has 10-year-old twin girls from his previous relationship.

But again, the husband and wife to be officially announced that they are no more together. Michele took Instagram on December 26, 2019, to announce her break up to her long term fiance Scandrick on Christmas day. She said that she has been single for the enter month of December.

She also added that: "So if anyone has anything to say about me or guy I used to be engaged to save it, I don't care". It means, Draya, aged 35, and aged 33, Orlando were together for nearly six years with many ups and downs.

Her Past Love Affairs with Notarized Boyfriends

As we already mentioned above, the Basketball Wives LA star got a lot of attention due to her relationship with Chris. They started dating right after Brown was cited in hitting the sh*t out of pop star singer, Rihanna. They dated for about nine months.

Before that, The Perfect Match's actress had a love affair with American rapper, Fabolous, whom she met back in 2009. During that time, she just started her modeling career off the ground. They met on his video set "Money Goes, Honey Stays" again later. She'd been dating Fab until she met Chris.

American basketball player, Gilbert Arenas is another ex to her, with whom she had on son, Kniko. Their relation has been solely sexual. But after the separation, Arenas still owes their son Draya $40 K a month in child support.

Morever, Michele has also been with four other celebrities including Kenyan Martin, Javaris Crittenton, Meek Mill, and French Montana.

What is Draya Michele's net worth?

As of early July 2020, Draya Michele has an estimated net worth of $600 thousand. She credits most of her earnings to her own professional career as a working actress and designer. Nicole Alexander is another reality TV star with the worth of $3 Million.

As a reality TV star, Michele also participated in the new reality show of VH1, "Basketball Wives: Los Angeles," a spin-off of their hit series, Basketball Wives. Thus, she might have earned $40,000 as compensation for her appearance. Shaunie O'Neal has also featured on Basketball Wives.