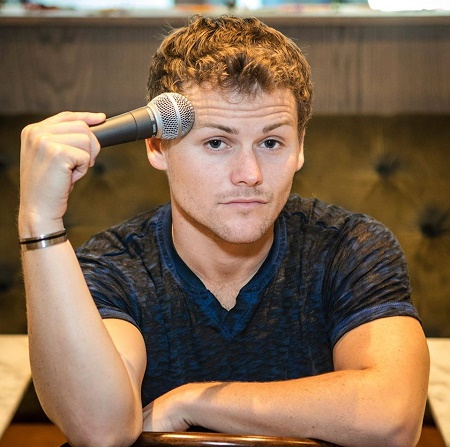 If you are passionate about comedy, then you don't need to introduce Drew Lynch. An American stand-up comedian, Lynch is known for an appearance on America's Got Talent on the tenth season, finishing second in the final.  As of now, he has amassed more than 2.2 million subscribers and 160 million views on his YouTube channel.

Drew was born on August 10, 1991, in Indianapolis to the parents Tim and Chris Lynch. His mother is an insurance businessman, where dad serves at the water heater manufacturing company.  Further, he was raised in Las Vegas with three siblings named Taylor Lynch, Monica Lynch, and McKailyn Lynch.

The 5 feet 4-inch tall comedian has been dating a lady named Melanie Sergueiv for over two years. On November 17, 2019, Drew mentioned his another half Melanie that she is everything for him on the occasion of the 2nd love anniversary.

For now, the Runner-up on America's Got Talent seems to relish a good time with his girlfriend, Melanie. The lovebirds have also shared their lovely images and moments with their fans via Instagram. Even in the quarantine time, the cute pair posted a workout video of each other on March 23, 2020.

Scrolling the Instagram profile of Melanie, she specially marked each day they spent together, including anniversaries, dates, Valentine's day, and other special moments in their lives. Melanie shared the photo, especially on Christmas season, on December 26.

And thus, the two live a happy life of love. Apart from his dating affair, Drew made a video on YouTube entitled 'Am I Gay? (Snapchat Q&A)' where he stated on July 6, 2017, that he is not gay.

TV star, Drew (28) auditioned in the 'America's Got Talent' competition in 2015. But during a softball game at 20, he got hurt and damaged his nerves in his vocal cords, and this made him suffer from the stutter.

Lynch played in Quarterfinals Week 1 and Semifinals Week 1 and then won the popular vote to be sent to the Finals. Lynch finished in the competition's Top 5 acts and eventually took the second position behind ventriloquist Paul Zerdin.

Lynch currently has a YouTube channel accumulating more than 2.2 million subscribers. He is seen posting comedy video to his YouTube channel and occasionally streaming it on Mondays and Thursdays with his dog Stella calling it the Dog Vlog. Stella is a breed of Vizsla, born on March 3 2013 (age 7).

What is Drew Lynch's Net Worth?

Working as a ѕtаnd-uр соmеdіаn, ѕосіаl mеdіа ѕtаr аnd TV реrѕоnаlіtу, Drew Lynch has an impressive amount of fortune. As of 2020, he has an approximate net worth of $1 million which is close to Liza Treyger. He has made his wealth through his comedy career and social media platform.

While Lynch did not become America's Got Talent's 10th season, he managed to get the golden buzzer from Howie Mandel that led him straight to the quarterfinals. He is also taking part in a variety of shows like 'Maron' and Drew Lynch (2018).

In addition, Drew Lync is earning $1.1K - $17.8K per month from his own Youtube channel named DrewLynch.

Don't forget to visit Marrieceleb for your favorite celebrities' articles!!!