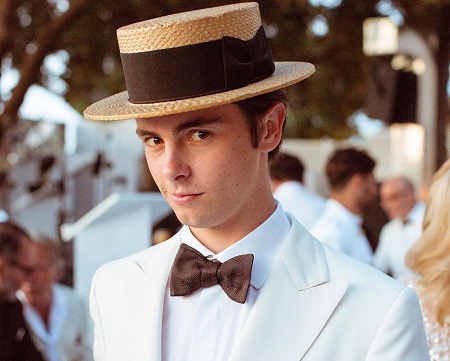 Dylan Michael Douglas is a rising actor who is known for starring on two TV shows which include Formula 1: BBC Sport (2009), and as Russell in Phineas and Ferb (2007). Rather than his own career, he is widely known as the firstborn child or eldest son of fabulous actor Michael Douglas and actress Catherine Zeta-Jones.

He was born on August 8, 2000, in Los Angeles, California, in the United States. Further, he has one biological younger sister Carys Zeta Douglas, aged 17, and has one big half brother Cameron Douglas, aged 41. His grandparents are Kirk Douglas, Diana Douglas, Patricia Fair, and David James Jones. His cousins are Ryan Douglas, Kelsey Douglas, Jason Douglas, and Tyler Douglas. So far, he studied at The Windward School and recently joined Brown University in Providence, Rhode Island in 2018.

Does He Have a Girlfriend?

The 19 years old Dylan is possibly single as of now and focusing on his acting career. Being a superstar kid, he knows how to manages his private life secret, which might be the reason; he never explains his love life to the public. Thus, he has no girlfriend at the moment.

On Instagram, Douglas is quite active and often shares a glimpse of his daily life. He recently posted the black and white photo with his father, Michael, on the special day of father's day, on June 22. Not only this but he shares regularly posts with his little sister and mother.

In fact, his dad, Michael who starred in Falling Down and Oscar-winning mom are incredibly close to their kids, and very satisfied with them, too. Now, he lives in Hollywood, Florida (USA).

His dad, Douglas, 75, and mom, Zeta-Jones, 50, has been happily married for two decades with no sign of divorce. The two first met at the Deauville Film Festival in France in August 1998. At that time, they were introduced by American actor, Danny DeVito, 75.

They were both born on September 25 but they have 25 years of the age gap. Dating since March 1999, they announced their engagement news on 31 December 1999 after a few months of love romance. The Kominsky Method's star and Queen America's star walked down the wedding aisle on 18 November 2000 at the Plaza Hotel in New York.

The function was held in front of 350 guests including Jack Nicholson, Goldie Hawn, Meg Ryan, and retired U.N. Secretary-General Kofi Annan. The entire wedding ceremony cost was estimated at £1.5 million. In fact, the newlyweds signed a £1 million contract with an OK! magazine to publish images of the function. While the rest of the press were not permitted to join.

Besides it, Michael was previously married to his first wife, Diandra Luker from 1977 to 1995. While Catherine was also shortly engaged to Scottish actor Angus Macfadyen in the mid-1990s.

Dylan Douglas who first made his TV debut through TV show Girl Meets the World has amassed a decent amount of money. But still, his actual net worth has not been disclosed by any sites. Thus we can assume after looking at his TV appearances, it is around $300 thousand.

While his mother, the Welsh-based actress Catherine Zeta-Jones now enjoys the worth of $150 Million. Thus, Dylan is currently living a lavish lifestyle along with his well-known parents.