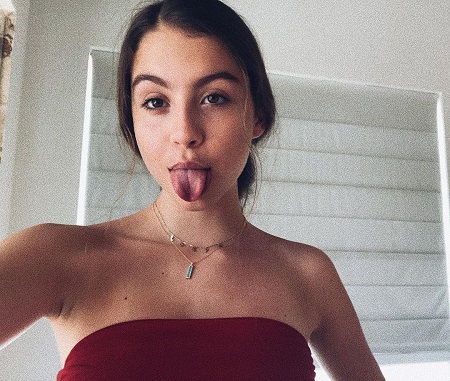 Celebrity youngsters are always on publicity not because they have gained something, but they are related to popular faces. Carys Zeta Douglas is one of them who is best known as the youngest daughter of American actor and producer, Michael Douglas, and his second wife, Catherine Zeta-Jones.

She was born on 20 April 2003 in Ridgewood, New Jersey, the United States at Valley Hospital. During her birth time, she weighed 6 lbs and was 12 oz. Further, she has one biological big brother Dylan Michael Douglas, aged 19, and one half brother Cameron Douglas, aged 41. Her grandparents are Kirk Douglas, Diana Douglas, Patricia Fair, and David James Jones. Her cousins are Ryan Douglas, Kelsey Douglas, Jason Douglas, and Tyler Douglas. For her education, she is still studying at a college.

Is Carys Dating Anyone Currently?

No, the beautiful Zeta Douglas doesn't seem to be engaged in any form of a love affair at this moment. Therefore the immature kid of the celebrity is reported to be single and has no boyfriend as well.

Additionally, Carys, 17, is very active on social sites such as Instagram, Twitter, and Facebook. Now, scrolling her Instagram wall, there are no romantic pictures with her loved ones. Instead of uploading photos with her lovers, she is sharing family photographs from their adventures and hanging out images with her friends.

Not only she but her mother, Catherine also shares beautiful snaps of Caruys on her Instagram account. Recently on July 19, 2020, she posted the photo of Carys wearing a white silk maxi gown in a garden with the caption: "My girl, in the garden".

Oscar-winning mom said that she is incredibly close to her kids, and very satisfied with them, too. Now, the whole family resides in Chiswick and Swansea.

The Lavish and Expensive Wedding

Her dad, Douglas, 75, and mom, Zeta-Jones, 50, first met at Deauville Film Festival in France in August 1998. At that time, they were introduced by American actor, Danny DeVito, 75. They were both born on September 25 but they have 25 years of the age gap.

Dating since March 1999, they announced their engagement news on 31 December 1999 after a few months of love romance. The Kominsky Method's star and Queen America's star walked down the wedding aisle on 18 November 2000 at the Plaza Hotel in New York.

The function was held in front of 350 guests including Jack Nicholson, Goldie Hawn, Meg Ryan, and retired U.N. Secretary-General Kofi Annan. The entire wedding ceremony cost was estimated at £1.5 million.

In fact, the newlyweds signed a £1 million contract with an OK! magazine to publish images of the function. While the rest of the press were not permitted to join. Besides it, Michael was previously married to his first wife, Diandra Luker from 1977 to 1995. While Catherine was shortly engaged to Scottish actor Angus Macfadyen in the mid-1990s.

Meanwhile, Carys' actual amount of net worth is still under investigation. But she has just recently been embracing her passion for fashion by posing with her mom in several magazines. She has done a photoshoot for Vanity Fair Spain, Town & Country.

While the Welsh-based actress Catherine Zeta-Jones now enjoys the worth of $150 Million. Thus, Carys Zeta is currently living a lavish lifestyle along with her parents.