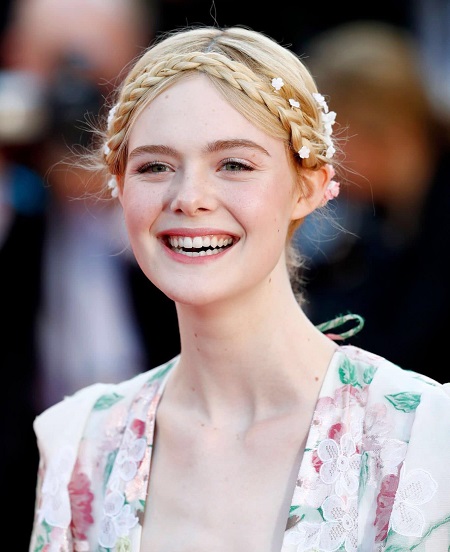 Elle Fanning is a successful American actress who made her breakthrough by starring as Alice Dainard in J. J. Abrams' science-fiction film Super 8  in 2011. Further, she gained international recognition when she acted in hits films like We Bought a Zoo (2011), Ginger & Rosa (2012), Maleficent (2014), The Neon Demon (2016), and The Roads Not Taken (2020). Currently, she stars in the Hulu series The Great as Catherine the Great.

Mary Elle Fanning was born on April 9, 1998, in Conyers, Georgia, United States. She is the daughter of Steven J. Fanning, who played minor league baseball now serves as an electronics salesman and Heather Joy Arrington, a tennis player. Moreover, she has older sister Dakota Fanning (age 26 years) who is also an actress. So far, she holds American citizenship and is of white ethnicity.

Yes, the 22 years old beautiful actress Elle is officially off the market. In the meantime, she has been relishing her love life with her 34 years old boyfriend, Max Minghella, an English-American actor, and filmmaker. It means the age difference between them is 12 years.

In August 2018, the reports indicated Fanning and Minghella are privately dating in August 2018. They first spotted together in July 2018 when they captured holding hands in Florence, Italy. However the two never publicly admit their relationship, as they said they were simply good friends.

But their one year of romance in love recently went public. As they made their first public appearance as a couple at the 2019 Met Gala red carpet. So, they are together for around three years. Likewise, the couple probably first met on the set of their film Teen Spirit.

Before Max, the 175 cm tall star has dated an assistant director, Dylan Beck in the past, 2014. Also, she was romantically linked with actor Zalman Band, the son of Charles Band, and Debra Dion. Elle and Zalman first spotted together in July 2015 by holding each other hand to go breakfast date.

On the other hand, her current boyfriend, Minghella was also involved in three other relations before dating Elle. He was in a romantic relationship with Leigh Lezark from 2006 to 2009.

What is Elle Fanning's Net Worth?

Elle who acted professionally since 2001 has become one of the fast-rising stars in the Hollywood industry. So she has amassed an impressive amount of $5 Million net worth as of early 2020. She owes her earnings to her successful acting and modeling gigs.

Similarly, Fanning received $1.74 Million from Walt Disney’s Maleficent: Mistress of Evil in 2019, starring Angelina Jolie. And the film grossed over $491 million against the budget of $185 million. Asides acting, she has done endorsement for Toyota, Smuckers, and Target.

Elle further has made appearances in commercial J. Estina with her sister, Dakota, who shares $12 Million worth. Also, she starred on fashion line print adverts named Marc Jacobs ‘Marc in 2011. In addition, the Fanning's sisters have bought an estate for $2.7 million in the San Fernando Valley in California.