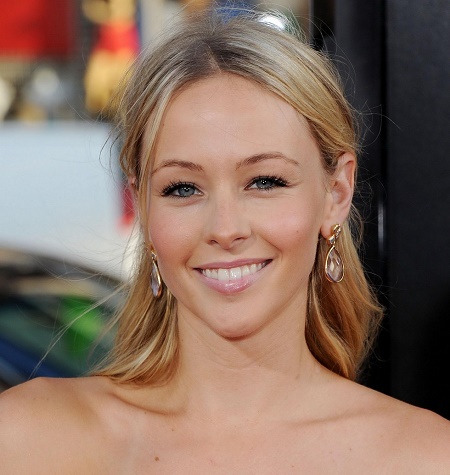 Emily Montague is an American actress, producer, and former model who has been part of the entertainment industry for over a decade. Well, she is known for her works including Days of Our Lives (1965), Fright Night (2011), Resolution (2012), and The Endless (2017).

She was born on August 30, 1984, in Livingston, New Jersey, United States. But much information is not known to the media regarding her family and educational background. As per her citizenship, she is American and is of Caucasian White ethnicity.

Since the divorce from Chris, the 1.63 m tall star shares a strong and healthy conjual life with her second life partner. He is none other than Damon Dayoub, 39, who is a famous American actor. His significant performances include Chicago Fire, Suits, NCIS, and Stitches.

Emily and Doman who is a graduate of the University of Texas at Austin first met on the set of Warring Hearts back in 2014. After one year of dating, the lovebirds tied the knot on May 2, 2015, in a private ceremony. Since then, the two are happily married for five years with no sign of problems.

Together, Montague and Dayoub, the 6 ft 3 in tall are blessed with one little baby girl. They welcomed their firstborn child Ava James Dayoub in December 2017. Currently, the trio lives in Los Angeles, California.

She is Famous as the Ex-Wife of Chris D'Elia

Yes, it is very true. The 35 years old Montague got huge fame after marrying an  American standup comedian and actor Chris D’Elia. He is well known for his roles like Danny Burton in Undateable, Alex Miller in Whitney, and Kenny in The Good Doctor, where Annette O'Toole also featured.

On July 29, 2006, they got hitched and had divorced in 2010, after being nearly four years together. During their marriage, the ex did not have any offsprings. In late 2018, Chris, 40, said on Vulture that he and Emily were planning to have children. But sadly they ended up pursuing their dreams of separating a family.

He said: “Kids were in the plan. It’s a case-by-case basis". He continues saying,

“You never really know what’s going to happen with who, but as long as you’re open to all of that and thinking about the possibility of what could happen, I think that’s the best way.”

Now, D’Elia, the son of the director, Bill D'Elia, is rumored to be dating Kristin Taylor, according to online tabloids.

The Exact Amount of Net Worth

At the moment, Emily Montague’s exact net worth is not known. But some sources estimated it is around $800 thousand as of early June 2020. She has earned her fortune throughout her early modeling and acting career with over 20 acting credits to her pocket.

On the other hand, her ex-partner, Chris D'Elia now enjoys a staggering worth of $13 million. He credits most of his wealth to his strong professional working as a stand-up comedian, actor, writer, and rapper.

As a real estate, Chris, who is 1.91 m tall, in January 2020 listed his LA home for $2.9 million. He purchased the house in the Beverly Hills mountains in 2017 for $5.4 million from actress Tricia Helfer. In fact, in 2016 he sold LA's Beachwood Canyon neighborhood for $1.9 million to Craig Ferguson.