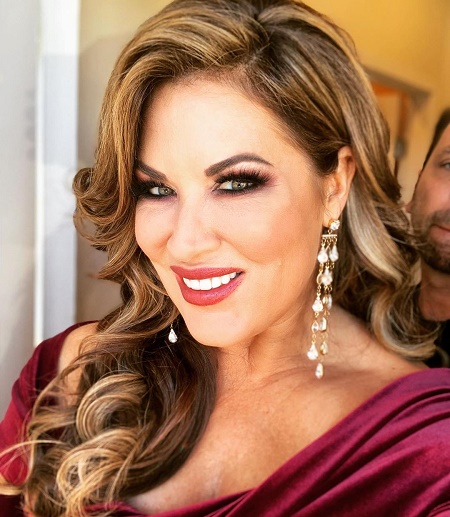 The reality star and equestrian, Emily Simpson, best known for being the new cast member of American reality TV show, The Real Housewives of Orange County. She joined the Bravo show's 13th season which premiered on July 16, 2018.

Emily Rebecca Simpson was born on January 19, 1976, in Ohio, United States. She holds American citizenship and belongs to the white ethnicity. Further, she has one sister named Sara. However, there is no information regarding her family background in the media.

As of now, Emily has been living a happy marital life along with her long term husband, Shane Simpson. He is a lawyer who has previously served as a practicing lawyer in Utah before moving to California.

The married duo recently has completed the 10th year of togetherness in early 2019. However, they have not disclosed any further information regarding their exact marriage date and dating history to the media. Despite being together for a long time, they have started to have some marital problems.

Emily who dropped 15 pounds weight last year admitted on a recent episode of RHOC that she and Shane are in a difficult situation right now and are not spending enough time together as a family. She said.“I’m reluctant to share things about my marriage because I don’t want people to jump on a bandwagon of bashing my husband.”

But also despite some ups and downs, it's clear that Emily and Shane are still committed to their beautiful family. They are very dedicated to each other, and they raise their five children together happily. Before marrying Shane, the Bravo star admits that she was in a relationship with a drug dealer. But her ex-boyfriend identity remains private or away from the limelight.

Together, Emily, aged 44, and her long term partner Shane have three biological children. But she suffered a miscarriage in 2011, after struggling with fertility problems for years.

Because of her fertility issues, her sister Sara came to visit shortly after that and offered to be their surrogate, according to Emily's interview with Bravo TV. And her sister, Sara, welcomed a daughter named Annabelle, 5, and twin boys three, Luke and Keller, 3.

Further, the 5 feet 10 inches tall star is the stepmother of two stepdaughters named Shelby (age 17) and Chanel (age 12) from the previous marriage of Shane. More interestingly, the reality TV star still wants more children but her husband doesn't want to have more babies.

How much is Emily Simpson Net Worth in 2020?

Simpson makes a suitable amount of money from her professional career as a reality TV star. Although her precise net worth is not mentioned anywhere, some sources estimated it is more than $800 thousand. Her co-stars including Kelly Dodd and Tamra Judge also make a huge amount of sum.

In the United States, the American Reality TV Show star's total income ranges from $33,500 to $73,475. So for her appearances in Bravo 's show The Real Housewives of Orange County, she could pay off in the same context. In addition, she is also making a fair amount of money as a party planner and attorney.