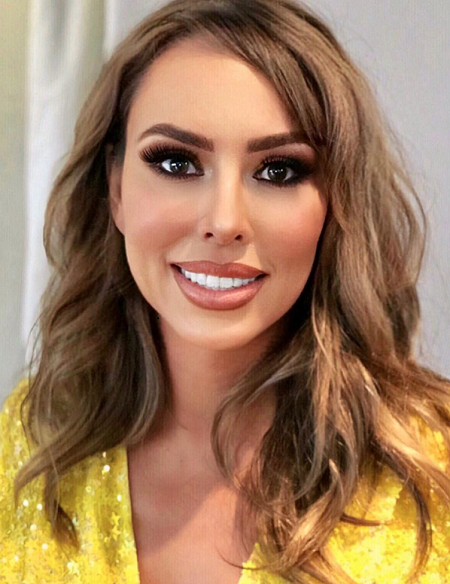 If you are a regular viewer of American reality television series The Real Housewives of Orange County, that premiered on March 21, 2006, on Bravo? Then Kelly Dodd is a familiar to you who's playing the main character since June 20, 2016. Added to that, she is the chief operating officer of a company called Kiss Me Mirrors.

Kelly Meza was born on September 26, 1973, in Scottsdale, Arizona to the parents, Bobbi and Frank Meza. Further, she has one younger brother named Eric Meza. She holds American citizenship and is of Latin-American ethnicity.

Was Married to Michael J. Dodd for 11 Years

The divorced duo' Kelly and Michale Dodd were in a marital relationship for about 11 years. The exes spouses who first met in 2004 tied the knot in the year 2006 after two years of dating. The ceremony was held in the presence of family and friends.

During their decade of married, the duo gave birth to one daughter in the year 2006 whose name is Jolie Dodd. Sadly, things went worse between them and they parted their ways in September of  2017. Nevertheless, 44, the reality TV star previously filed a divorce petition from Michael in 2012.

The couple who were together for over one decade finalized their divorce in February 2018. “I’m done with our marriage. It’s just a case where two people can’t get along. It’s best if we went our separate ways and concentrate on our daughter", the Bravo told the sources.

Following the split, the former couple definitely struck the right balance by co-parenting their daughter. But Kelly and Michale aren't in the right shape for now. "At the moment, Michael and I fight," she said, during the RHOC panel.

It is also revealed that Michale is filing for custody seeking to keep their daughter safe from Kelly's irresponsibility. "He does not want Kelly around Jolie," the source reports. Recently, Kelly left her daughter Jolie to be in New York with her boyfriend Rick Leventhal in the midst of the pandemic.

Yes, the mother of one, Kelly is set to get married. As she and Rick Leventhal, a Fox News reporter, are beyond optimistic about their future. On November 13, 2019, she revealed their engagement news by showing off their engagement ring via Instagram by sharing the holding with Rick.

"I can’t believe I just got engaged !! @rickleventhal you are my Prince and my dream come true!!!",  she wrote on the post. Rick said this amazing speech about their love and then got down on one knee and pulled out this giant ring,” she said on People.

“Rick is my best friend. My partner in crime. I’m so in love. The RHOCstar also added:  Further, the newly engaged couple is considering tying the knot on Oct. 10, 2020.

How Much is Kelly Dodd's Net Worth?

As of early June 2020, Kelly Dodd holds a staggering net worth of $10 million. She has garnered this impressive amount throughout her professional career as a reality television personality. Similarly, she reportdely brings home wage from $150,000 to $200,000 per season as the cast members of RHOC.

Besides this, Dodd, 44, now works as Kiss Me Mirror's Chief Operating Officer. This business offers cosmetic making mirrors around the globe. And from there she is also making a reasonable amount of money. Meanwhile, her ex-partner, Michael Dodd has an estimated net worth of $550 thousand through his business profession.

Apart from that, Kelly and her estranged husband, Michael sold their Corona Del Mar, California home for $5 million in 2017, after the divorce.