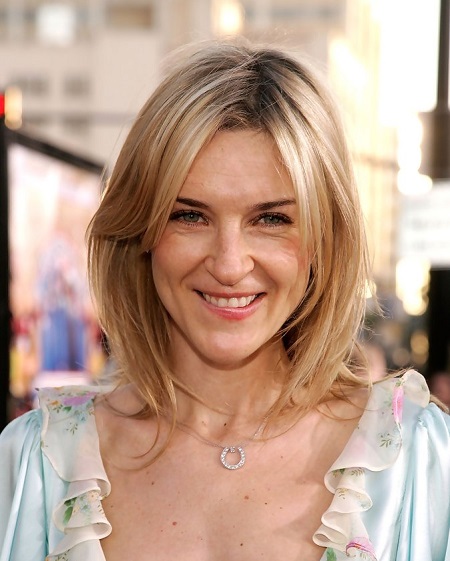 Facts of Ever Carradine

Body and Relation Status of Ever Carradine

Ever Carradine is an American actress who came to limelight when she played the main role of Tiffany Porter in ABC's TV series Once and Again from 2001 to 2002. Further, she is known for working as Kelly Ludlow in Commander in Chief from 2005 to 2006 and as Janet Stein in Runaways from 2017 to 2019. Currently, she stars on Hulu's TV series, The Handmaid's Tale as Naomi Putnam.

Ever Dawn Carradine was born on 6 August 1974 in Los Angeles, California, United States. She is the daughter of actor, Robert Carradine, and Susan Snyder, a horse trainer's assistant. Further, she has two younger half-siblings Ian Alexander Carradine, 27, and Marica Reed Carradine, 30, from her dad's marriage with Edie Mani. So far, she attended Lewis and Clark College in 1996.

She Tied The Knot With Musician, Coby Brown

Yes, the beautiful actress, Carradine is off the market. Now, she is enjoying her blissful conjual life with her life partner, Coby Brown. He is a Los Angeles based musician who released many songs such as it is a home, hospital, lived to tell the story, and opening titles.

46, Ever, and Coby, 46, walked down the wedding aisle on 1 October 2005 at Sconset Beach in the hush-hush ceremony. Over dozens of guests had attended their big day. Since their marriage, the couple is living a healthy life together with no sign of divorce.

Early in 2019, the Major Crimes' star and Drop Down Head's singer have celebrated their 14 years of the wedding anniversary. Moreover, they mostly post each other pictures on their respective IG accounts.

Ever and Coby's Children Named Chaplin and Samuel

Carradine and Brown are blessed with two little children. On August 9, 2010, the beautiful couple became parents when their eldest daughter or firstborn baby Chaplin Haddow Brown was born.

Five years later, they welcomed another bundle of joy son Samuel Hauck Brown on July 30, 2015. Now the family of four resides at their private residence in Beverly Hills, California.

How Wealthy Is American Actress, Ever Carradine?

Working in the entertainment industry since 1996, Ever has amassed a huge amount of money within herself. As of early 2020, her net worth is estimated to be around $1 Million. The primary source of her income is her professional acting career.

Similarly, Carradine makes the payroll $50307 a year for playing various roles in TV shows and movies. Now, she stars in the Hulu web series The Handmaid's Tale (2017–present) so her salary is estimated at $250,000 per season.

Ever has appeared in several TV shows and movies for 24 years. Her first film appearance was Foxfire where she portrayed the character of Girl in a printshop in 1996. Then after she landed the many roles in films like Lost and Found, Bubble Boy, My Boss's Daughter, Dead & Breakfast, and Constellation.

Her pre-production movie is All My Life. Also in 1996, Carradine made her TV debut from Diagnosis: Murder as Debbie. Moreover, she has acted in television series including The Sentinel, Veronica's Closet, Once and Again, Commander in Chief, Women's Murder Club Shameless, Runaways, The Handmaid's Tale, All Rise, etc.