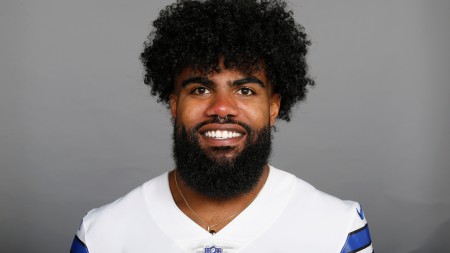 A true sportsperson never gave up until the game ends up with the victory because it is for the failures who get knocked down but still carries their battle till the end. Similar to an American football running back, Ezekiel Elliott is maintaining a good reputation through his footballing career with 5,405 rushing yards with 40 touchdowns, 189 receptions, 1,619 receiving yards, and eight receiving touchdowns. Currently, he is playing for his debut team, Dallas Cowboys.

Elliott was born as Ezekiel Elijah Elliott on 22nd July 1995 in Alton, Illinois, United States, and hails from African-American ethnicity. He is the son of Dawn Huff (mother) and Stacy Elliott (father), who are former American football players. So, is he dating someone or single right now? Let's take a glimpse of Elliott's personal life.

The 24-year-old football running back, Elliott is reportedly single and keeps his personal life as private as he can. Despite being a superstar in the field of football, he isn't much expressive to tell about his intimate experience.

Dallas Cowboys star player is currently busy maintaining his name on the top of his football statistics so that he can create a history in football like Jerry Rice, who played as the wide receiver for the San Francisco 49ers.

The 3-times Pro Bowl winner, Elliott was first involved in an affair with an American cheerleader, Leeanne Hurster before starting his NFL career. The duo's relationship wasn't enough to hold them back and separated after dating for a year.

After the breakup, Ezekiel started dating an American adult actress, Tiffany Thompson, who's from Mission Viejo, California in April 2016. The pair's affair also ended after only two months due to some personal conflict in July 2016.

Upon their separation, Tiffany posted some pictures where she pretended that she became a victim of domestic violence while dating with Elliott on 22nd July 2016. In the Instagram post, she wrote a caption for Ezekiel where she said,

Just for every woman out there getting abused it’s time to put a stop to it. This has been happening to me for months and it finally got out of control to where I was picked up and thrown across the room by my arms.

Thrown into walls. Being choked to where I have to gasp for breath. Bruised everywhere, mentally and physically abused. It’s not okay. So I want each and every one of you girls to step away now from domestic violence. You’re worth so much more. I got told it was called “tough love” I’m sorry if you love someone you don’t touch your loved ones.

Following the Instagram post, Tiffany threatened Ezekiel to sell their sex tape and to destroy his whole career in seconds through text message in September 2016. Later, Elliot to file a case against Thompson for sexual accusation in a police station located in Ohio. Elliott further proved himself right about the incident and Thompson guilty in the court.

Ezekiel also dated an American nurse and a Citizen Dallas waiter, Halle Woodard in 2017. During their relationship, Elliott and Woodard had a great time together, and Ezekiel's mother adores Halle very much. She also wished Woodard for her 26th birthday on the 25th of November 2019 via Instagram.

After dating for two and a half years, the pair eventually separated after attending the Electric Daisy Carnival Music Festival in Las Vegas in May 2019. During the musical event, Elliott was quite drunk, and Woodard was disappointed with his behavior.

Eventually, Elliott pushed down a security guard at the 1:18 a.m., which later ended up with arrest at 1:42 p.m. on the mark. Since then, the duo isn't sharing their company and lives a single life.

Ezekiel Elliott maintains a total fortune of $15 Million, which is less than Bradley Roby's net value. He currently earns an annual payroll of $15 Million on average from his six-year contract with Dallas Cowboys, which includes $28,052,137 guaranteed at signing and $7.5 Million signing bonus.

The football running back also earned from his debut seasons with Dallas Cowboys since 2016. So, his total cap hit with earnings are listed in the below,

More to that, Elliott is also a philanthropist who raises 5% of his income to charity works for the good of underprivileged societies. Back in 2016, he donated $150,000 for The Salvation Army at AT&T Stadium. He also gave his Zeke Who? T-shirts to the charity, coordinating with Chief Brand Officer, Charlotte Jones Anderson at the Star Stadium in Frisco, Texas on 26th November 2019.

Elliott is currently in an endorsement deal with a sports nutrition brand, BioSteel Sports, and gives a 40% discount to his fans while purchasing the BioSteel products. He also promotes the Wingstop Chicken Wings food franchises.

In one of Ezekiel's Instagram posts, he was seen promoting the most popular sports footwear brand, Nike on 3rd May 2019. Similarly, Drew Brees also garnered a handsome wealth from his endorsement deals.