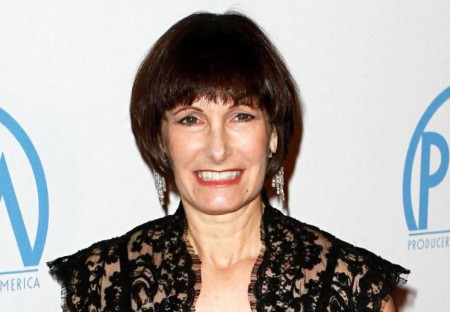 Hollywood's iconic movies such as The Terminator, Aliens, and The Abyss, are equally memorable in the audience's memory. These movies brought an entirely new dimension in the film industry. Directing these movies were very challenging back then, along with producing it. But, being a risktaker, Gale Anne Hurd produced these movies and gave us memorable films.

So, who exactly is Gale Anne Hurd? The 63-year-old, American film and television producer is the founder of Valhalla Entertainment. She is the former recording secretary for the Producers Guild of America. Also, she became the governor of the Academy of Motion Picture Arts and Sciences in 2011.

The heavyweight producer, Gale is happily married to screenwriter and film director, Jonathan Hensleigh. The couple first met in the Paramount commissary in 1995. The same year they exchanged their wedding vows on June 19.

Gale and her longtime husband, Jonathan is married for over 24 years as of 2019. Till now, they are still together without any controversies. However, Jonathan is Hurd's third spouse.

The Walking Dead producer was first married to the visionary director, James Cameron. The former spouses married each other in 1985. Cameron was Hurd's first husband while he was previously married to Sharon Williams from 1978-1984.

They first met on Roger Corman's 1980 release Battle Beyond the Stars. At that time, both Hurd and Cameron were responsible for keeping the art department on budget. Working together, they quickly developed a mutual admiration.

After her divorce with Cameron, Gale married director, Brian de Palma in 1991. De Palma is often cited as a leading member of the New Hollywood generation of film directors.

The 79-year-old film director and screenwriter directed Hollywood's prominent and mainstream box office hits such as Dressed to Kill, Scarface, The Untouchables, and Mission Impossible.

De Palma and Hurd have one daughter Lolita de Palma, born in 1991. The former couple's marriage lasted for only two years until their divorce in 1993.

Gale and her first husband, Cameron collaborated in 1984 with the film, The Terminator starring Arnold Schwarzenegger. The movie proved to be a surprise box-office hit collecting $78.3 million against the production budget of $6.4 million.

Want to know an interesting fact? After writing the screenplay for The Terminator, Cameron sold the script to Hurd for $1 so that she could afford to produce it.

The former couple also worked together for the movies Aliens, The Abyss, and Terminator 2: Judgement Day.

Hurd and her second husband, Palma has also collaborated for the 1992 movie, Raising Cain. The film which starred John Lithgow, Lolita Davidovich and Steven Bauer grossed $37.1 million at the box-office against the production budget of $12 million.

After Raising Cain, Palma and Hurd never worked together as they divorced two years after their marriage in 1993.

Jonathan made his debut as a director with The Punisher in 2004. At the time, his wife Hurd assisted him as a producer. Likewise, Gale also produced 2007 found footage horror film, Welcome to the Jungle.

Further, Jonathan also wrote screenplays for some of the biggest blockbusters of 1990s such as 'Die Hard with a Vengeance' and 'Jumanji.'

Although she has been married three times, Hurd only has one daughter, named Lolita De Palma. Lolita is the daughter of Hurd and her second spouse, Brian de Palma.

Lolita was born on September 19, 1991, in the United States. As of 2019, she is 28 years old. She lived with her mother and stepdad, Jonathan lived in the Pasadena house. Also, she portrayed a walker in AMC's The Walking Dead in episode TS-19.

The governor of the Academy of Motion Picture Arts and Sciences, Gale Anne Hurd, enjoys an impressive net worth of $60 million. Also, she has over 35 years of producing movies in the movie industry.

The primary source of Hurd's income comes from her role as a movie producer and businesswoman. She is the founder of Valhalla Entertainment. Almost all of her Hurd's movies have excellent box-office track records. Also, the majority of her earnings comes from her real estate investments.

Some of the movies in which Gale worked as a producer became blockbuster. The box-office collections are given below:

Hurd currently serves as the executive producers for the post-apocalyptic horror drama tv series, The Walking Dead and Fear the Walking Dead. Both shows are created by the renown comic writer, Robert Kirkman. In the coming days, Hurd's income will rise even more.

The above article aims to provide an insight into one of Hollywood's heavyweight film producer, Gale Anne Hurd. To know about your favorite star, please follow MarriedCeleb.