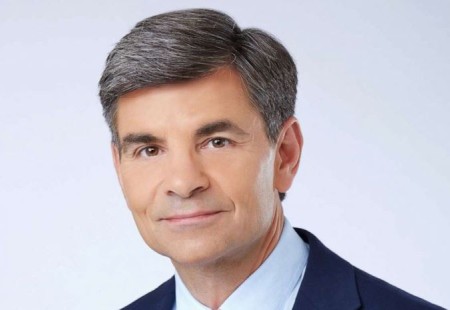 George Stephanopoulos is an American television host who is currently working for ABC News as a chief anchor and political correspondent. A liberal political commentator and former Democratic advisor, George worked as the communications director for the 1992 presidential campaign of Bill Clinton. Further, he also became the White House Communications director.

George Robert Stephanopoulos was born on February 10, 1961, in Massachusetts, the U.S. He is 59 years old as of 2020. George's notable works include Good Morning America, This Week, ABC's Sunday morning events news programs, etc.

George's Wife is a Famous Personality

Stephanopoulos is married to his wife, Ali Wentworth, an actress, comedian, author, and producer. The couple exchanged their wedding vows on November 20, 2001. Further, their marriage ceremony took place at the Archdiocesan Cathedral of the Holy Trinity in New York City. They first met on a blind date in April 2001 and got engaged two months later.

Ali Wentworth first became famous for her impressions of celebrities like Hillary Clinton, Brooke Shields, etc. in the Fox sketch comedy series "In Living Color." She has appeared in movies like Jerry Maguire, Office Space, and has hosted a daily talk show on Yahoo! Shine.

The couple isn't involved in controversies as of now. However, George was once backlashed for attending a party thrown by Jeffrey Epstein, a convicted sex offender.

George and Ali both tested positive for Corona-Virus

Watch George and his wife, Ali's journey, on fighting corona-virus!

George wasn't surprised by the result as he was working from home taking care of his wife. The couple practiced major safety precautions, and on April 21, George announced that he and Ali cleared the virus. The family is now safe and healthier. CNN's Chris Cuomo also tested positive for coronavirus.

The political commentator and television host, George Stephanopoulos has a net worth of $40 million as per celebrity net worth. He amassed a great fortune through his political and journalism career. George earns an annual salary of $15 million as a co-anchor of ABC's Good Morning America and as a regular anchor of ABC World News Tonight.

George and his wife sold their Southampton house for $5.9 million in 2019. George has been working as the news correspondent and television host since 2002. In early 2019, ABC News revealed that they signed George to a four-year deal valued at $15 million a year.

The report also suggested that his salary may increase over the course. Therefore, the anchor's bank balance will add up in the future. His GMA co-anchor, Michael Strahan's net worth is $65 million.