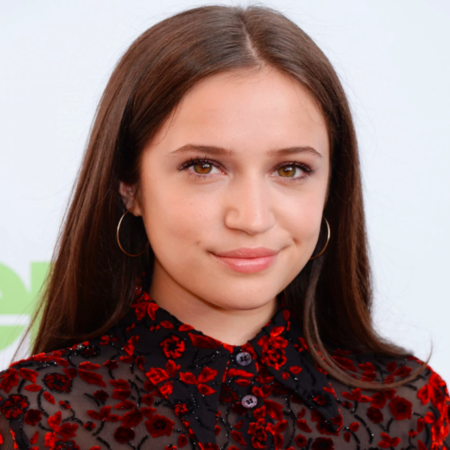 Have you ever watched Netflix's American mystery teen drama series, The Society? If yes, then you might familiar with Gideon Adlon, who played the role of Becca Gelb. Moreover, Gideon is an American actress who is famous for her works on Blockers(2018), The Mustang(2019), and so on. Besides, she began her career playing recurring roles on series like When We Rise and American Crime as well as films like Skin in the Game.

Netflix's teen drama series, The Society actress, Gideon Adlon was born on March 30, 1997, in Los Angeles, California, USA. Further, her mother, Pamela Adlon is a famous American actress and director whereas her father, Felix O. Adlon is a writer. Unfortunately, her parent's divorce in 2010. Apart, she grew up with her two sisters Rockie Adlon and Odessa Adlon. She holds an American nationality and belongs to mixed ethnicity. However, her educational qualification is still under review.

Well, Gideon, 23, is in a romantic relationship with her boyfriend. Moreover, she is dating her high school sweetheart, Boris Stoimenov. The love birds started to date each other from early 2015. Apart, she is very open about her relationship and often shares an adorable picture with her boyfriend on her Instagram account.

Besides, we can often see Adlon with her boyfriend, Boris, attending award shows and events by holding hands. So far, there is no news of their separation or split up yet. Apart, she also loves photography and also runs a self-titled photography blog. Gideon loves to spend her free time with two sisters and mother by going on vacation.

The 163 cm tall, Gideon has collected a hefty amount of money from her career as an actress, model, and social media personality. Furthermore, her net worth is estimated at around $500,000 which is similar to Lily Newmark. She might earn around $50,000-$60,000, an average annual salary as an actress.

Besides, Adlon appeared in the movie Blockers(2018) which box office collection is $94 million over the budget of $21 million. Apart, she also earned extra money from her photography blog. Currently, she is living a lavish and healthy life with her mother and two sisters in Los Angeles, California.

The talented and young actress, Gideon began her career in 2011 by portraying the roles in series Louie. Apart, she also appeared as herself on the MTV storytelling series Greatest Party Story Ever, entitled "Greatest Pee Story Ever". Besides, Adlon is also known for her recurring role in series like When We Rise and America Crime.

Nevertheless, she rose to fame after appearing in the movie, Blockers in 2018. Back in 2019, she also worked in the movie, The Mustang. Moreover, she is currently playing the role of Becca Gelb in high-rated Netflix's teen drama series, The Society. Furthermore, Adlon appeared in the series along with Kathryn Newton, Sean Berdy, Olivia DeJonge, and many others.