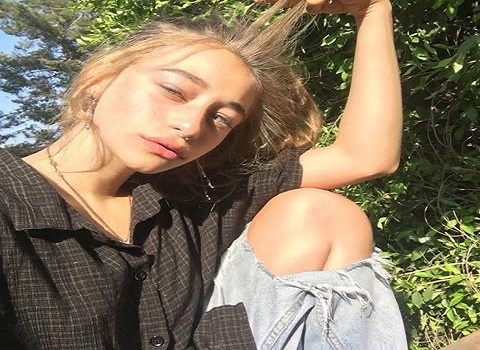 Who is Odessa Adlon?

If you have ever watched the popular show, Nashville, then you must be familiar with the role of Liv starred by the famous American actress, Odessa Adlon. Besides this, Adlon is widely recognized as the girlfriend of actor and singer Jaden Smith.

Odessa Aldon was born on 17 June 1999 in California, USA. Further, she is the daughter of parents Felix O. Adlon (father) and Pamela Adlon (mother). Her mother is a famous actress,  director, voice actress, screenwriter and producer whereas her father is a writer. Unfortunately, her parents divorced in 2010. In addition, she has two sisters Rockie Aldon, and Gideon Aldon.

Aldon holds American citizenship and is of German, English, and American ethnicity. Regarding her education, she joined Champs Charter High School. She started her acting career in 2011 when she had a minor role in the romantic comedy film Conception. Moreover, Odessa has appeared in several TV series and films including Better Things(2016), Nashville(2017), What About Barb, Ladyworld (2018).Currently, she is working on the new TV comedy series Fam (2019), starring  Nina Dobrev and Tone Bell. Along with this, she is performing on the horror film Let’s Scare Julie to Death.

What is Odessa Adlon's Net Worth? Salary

Odessa Adlon's net worth is under review but some sources estimated it is over than $1 Million. The actual income source of her earnings is her acting career. Likewise, she is a rising star so her wealth will definitely increase in the coming days.

Adlon's actual salary has been concealed. Moreover, she has appeared in the five episodes of Nashville so she might be earned a colossal amount for her role. Besides this, Odessa Adlon’s boyfriend, Jaden Smith's net worth is estimated to be around $8 million. Likewise, her boyfriend's father Will has a net worth of $300 million.

On the other hand, Adlon's mother Pamela is a famous TV personality who has a net worth of  $16 Million as of 2019. In the same way, her father Felix has a net worth of $11 Million. While her parents are no longer together, with their wealth, she loves a luxurious and lavish lifestyle.

With a height of 5 feet 5 inches, Odessa Adlon is a bit young to get married. However, she is in a romantic relationship with Jaden Smith since 2017. Well, Jaden is the son of famous American actor, rapper, and songwriter, Will Smith and his wife Jada Pinkett Smith.

Adlon and actor Jaden enjoyed a romantic beach day for the first time in April 2017 in Miami Beach, Florida. Since then, the lovebirds have been seen kissing and cuddling together on several occasions, including at Coachella.

Similarly, on September 2017, during the TV premiere of Better Things, they openly announced their relationship making red carpet entry together. Since then, they couple have been open flaunting one another’s pictures on their social media accounts.

Now, Odessa and Smith probably spent more time together than we have speculated. The love birds often flaunt their pictures in social media accounts. As per the post, it seems like they share a strong bond with a full-fledged relationship.

In the past, Jaden Smith was in a relationship with young actor Sarah Snyder. He also dated Amandla Stenberg, Stella Hudgens, and Madison Pettis.

To know more about celebrities, stick on marriedceleb.