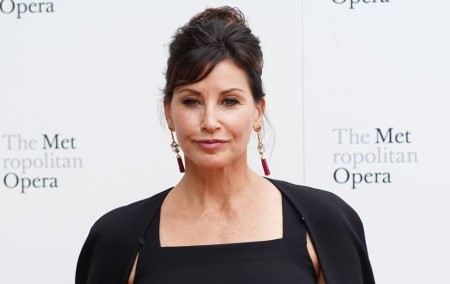 Gina Gershon is one of those iconic celebrities who has enjoyed success in theater, tv, and film. Gershon is known for her roles in movies Cocktail, Showgirls, Bound, Face/Off, Killer Joe, etc. Similarly, her notable television credits include Cleaners, Riverdale, Curb Your Enthusiasm, Psych, among others.

Besides being an actress, Gina is also acknowledged as a singer/songwriter and musician. In fact, she began her career in music and dance. Since 2018, Gina has been portraying the character of Gladys Jones on The CW teen drama series, Riverdale.

The New Amsterdam actress is a single woman as of this writing. Gina Gershon has never been married and the 58-year-old seems to enjoy her single life. Unlike Gina, her co-star from P.S I Love You, actress, Hilary Swank is married.

Watch Gina talking about marriage and her love life!

While the actress is open about her affairs, Gershon just might not be lucky when it comes to finding the right partner. However, she was in a long term relationship with a Belgian-German entrepreneur named, Robert "Bobby" Dekeyser.

Gershon and Dekeyser had a long-distance relationship from 2012-2016. Due to their professions, the couple had on-off romance until they officially split. Gina was about to marry her then partner but something just didn't work out.

Gina's ex-partner is a Belgian-German entrepreneur and former football goalkeeper. Robert is the founder of DEDON, a Germany-based manufacturer of outdoor furniture. Similarly, he founded DEDON ISLAND, a luxury resort in the Philippines.

Before dating Gina, Robert was in a marital relationship with Ann-Kathrin, his wife of more than 20 years. With his late wife, Robert shared three children.

The gorgeous actress has dated over ten men in the past including rumors as well. The most high-profile linked up of Gershon was with Bill Clinton. While she met Clinton on few occasions, the story of their affair was clearly false.

Now talking about some true stories, Gina dated John Cusack in 1992. She then dated Sean McPherson from 1996-1999. Gina dated Owen Wilson from 2000-2002. In 2016, she was said to have dated Travis Fimmel. Similarly, Gina has been linked up with Ted Demme, Beck Hansen, and Ralph Fiennes.

Gina Gershon has a net worth of $10 million as per celebrity net worth. She is a film, television, and theater actress. Gina's breakthrough performance came with 1986 Pretty in Pink. Let's see some of her movies that collected excellent revenue at the Box-Office.

Gina is one of the most iconic actresses of the 90s. She is often regarded as a gay icon and is a former inductee of Maxim's Hot 100 Women. No doubt, Gershon has an impressive fortune.

Talking about real estate, Gina resides in New York. Back in 2015, she and her ex-boyfriend sold the 2,391 sqft duplex pad for $8.2 million located in New York.

Gershon's career has spanned nearly 40 years. She appeared alongside Elizabeth Berkley in the 1995 movie, Showgirls. Likewise, Gina shared the screen with Jennifer Tilly in the 1996 film, Bound. Both movies underperformed at the box-office.

In television, Gina earned critical acclaim for appearing in Curb Your Enthusiasm, Ugly Betty (appeared alongside Vanessa L. Williams), How to Make It in America, Brooklyn Nine-Nine, etc. She has been appearing as Gladys Jones in The CW series, Riverdale with, KJ Apa, Lili Reinhart, Camila Mendes, among others.

As mentioned, Gina is a musician and she has played Jew's harp on a few songs. She published a book titled, Camp Creepy Time with her brother. Her first book was In Search of Cleo: How I Found My Pussy and Lost My Mind.

Gershon was born on June 10, 1962, in Los Angeles, California, the United States. The youngest of three children, she was born to parents, Mickey Gershon and Stan Gershon. Further, she has two older siblings, brother Dan and sister, Tracy.

Gina started acting at age 14 and she moved to Boston after graduating from High School. She graduated with a BFA in drama and psychology/philosophy from New York University.