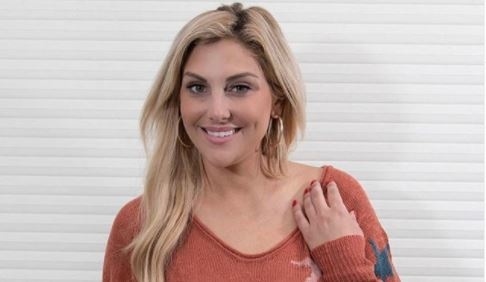 Gina Kirschenheiter is an American reality television personality best known as one of the newest cast members of 'The Real House Wives of Orange County'. Former model and TV personality, Gina previously served as a flight attendant for North American Airlines. Recently she is highlighted with the news of divorce from her ex-husband Matthew Kirschenheiter.

The thirty-five-years-old TV personality was born on 11 March 1984, in Long Island, New York, US. She grew up there alongside her brother, Chris Archer. Her father, Gene Archer, and mother, Susan Archer are still living in their home town, Long Island. She graduated with a degree in Psychology and is currently residing in Los Angeles, California.

The television personality from Long Island is also a mother of three children. Currently, she is dating her new boyfriend, Travis Mullen. The couple is together since September 2019 and they often post photos of each other in their social media.

She shared the images of her and Mullen laughing together in her official Instagram account, where she captioned,

"Always find a reason to laugh. It may not add years to your life but will surely add life to your years."

The duo was set up by a mutual friend and since then they are inseparable. As of now the pair seems very much happy with each other and is often seen traveling various places together; And are enjoying their togetherness very much.

Reflecting on her past years, Gina exchanged her wedding vows on 15th May 2010 with Matthew Kirschenheiter who is a financial planner. As per some reports, they started dating somewhere in 2005/06 and decided to take their romance to the next level.

The duo enjoyed their marital life for eight years following from 2010 to 2018, on that duration they share three kids, one daughter, and two sons.

Nicholas who is eldest of all is currently seven-years-old while Sienna and Luca are five-years-old and four-years-old respectively. As of now, the kids are living with their mother, Gina while Matthew received the authority of visitation.

The long-time married couple called it all quit back in 2018 which was officially confirmed on May 3rd of the same year. The pair reconciled numerous times while working out on their problems but the divorce continue on. It even went further because Matthew was arrested for domestic violence relating to an incident with Gina.

He is set to be charged with felony "corporal injury-on spouse, if so then he is facing four years in prison for domestic violence and an additional three years on the false imprisonment charge. However, he is not pleaded guilty to the charges and is awaiting trial.

Despite the legal issues, the ex-couple reached a divorce settlement which has Matthew paying $10,000 in child support. Therefore the pair agreed to take one counseling co-parenting class per month together and neither will downgrade the other in front of their kids or anywhere else.

The net worth of Gina Kirschenheiter

Unfortunately, Gina's net worth hasn't been estimated yet. However, being one of the known celebs in the RHOC her net worth is surely in a very good number.

According to CelebrityNetWorth, her total fortune is around $1 Million that might not seem like much compared to her co-stars but this is only her second season on the show.

Previously as a flight attendant, she used to make over $75,986 annually. As of now, she is enjoying her new house located in Los Angeles alongside a new boyfriend and three kids.

It's still unknown how they split the profits from the sale, but RHOC star is now moved into a new house in Orange County. Another RHOC star Heather Dubrow and her husband Terry Dubrow sold their mansion in $16.4 Million and built their new one.

Stick to married celeb for more biographies and gossips