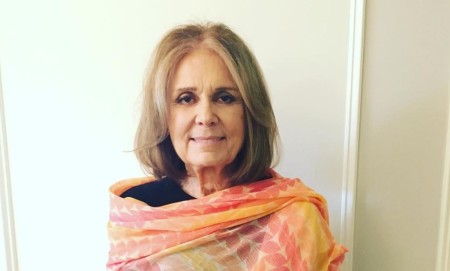 American journalist, Gloria Steinem is well known for her feminism works and the feminist movement during the time of 90s. She came to prominence after she wrote a news with the title, "After Black Power, Women's Liberation", which is about the revolution of women empowerment. For her notable works, she received numerous accolades and honors, including two Primetime Emmy Award recognition.

Steinem was born as Gloria Marie Steinem on 25th March 1934, in Toledo, Ohio, United States. She is the daughter of Ruth Nuneviller and Leo Steinem. She, moreover, hails from mixed ethnic background. To know more in details about Steinem's personal life, read the article till the end.

American feminist, Gloria was married to an English businessman, David Bale. The couple exchanged their wedding vows on 3rd September 2000, at the Adair County home of Wilma Mankiller (who's a good friend of Steinem) in Iowa.

At the time of their wedding, the pair invited their close family relatives and friends, including Nicole Vandenberg. Similarly, the bride was seven years older than groom, but they didn't hesitate about their age-gap and maintained a blissful relationship.

The couple met for the first time at a function of Voters for Choice, a political action committee, in which Steinem volunteer Bale, who was a fundraiser during the period. After working together for a while, the duo became friends and found their business and social interests. Later, they began dating and got engaged after a few months.

After spending two happy years in a blissful relationship, Steinem's husband was hospitalized after a sudden brain injury found in July 2003. Sadly, her husband died on 30th December 2003, due to brain lymphoma. At the age of 62, David was buried in Santa Monica, California, by their family and close relatives.

The award-winning journalist, Gloria became the step-mother of four children, Louise Bale (born on 22nd July 1972), Christian Bale (born on 30th January 1974), Sharon Bale, and Erin Bale after getting married to David. These children are from David's previous marital relationships.

Steinem's older step-daughter, Louise is an American actress, who acted in the short action-adventure movie, The Death of Batman in 2003. Likewise, her second step-son, Christian is also an actor who recently featured as Ken Miles in the sports drama movie; Ford v Ferrari.

Gloria's spouse, David was married to his first wife, Sandra Keunen in a private ceremony held between their close ones. Nevertheless, their marriage didn't take place and divorced in 1964. After their divorce, David took the responsibility of their child, Louise.

Bale, further, married to his second wife, Jennifer James with whom he shared three adorable children, including Sharon, Erin, and Christian. The duo tied the knot in 1972, but their marriage also ended with a divorce, and David took the custody of their kids.

Just like her late spouse, Gloria dated an American media proprietor, Mortimer Zuckerman. In an interview, Steinem said that she was linked in a four-year affair with Zuckerman while she was serving as a Ms magazine in 2014. However, there was no intense speculation on their relationship, and Steinem said the proof of their pictures together were erased after they split up.

Gloria Steinem has a net value of $3 Million as of 2019. She earns a handsome remuneration from her profession. Meanwhile, in the United States, the average salary of a journalist is $50,685. So, her annual income might be in the same range. Just like her, some other feminists, including Charlene Carruthers and Gloria Allred are making a fruitful payroll from their works.

As an actress, Gloria also brought feminism in the entertainment industry while featuring in many successful movies related to the feminist movement. She initially appeared in the comedy movie, The First Wives Club in 1996, which grossed $181 Million, against $30 Million.

Steinem then made her appearance in the dystopian political thriller movie, V for Vendetta, where she acted under the direction of James McTeigue in 2005. The film earned $70,511,035 in North America and $62 Million in other territories, for a worldwide total of $132,511,035 with a production budget of $54 Million.

The national fame feminist leader, Gloria was criticized for pornography when she distinguished some topic on erotica. She then expressed her opinions on the argument where she proclaimed that the women's community towards male-dominated society. She further added some statement on the criticism, where she stated,

"Erotica is as different from pornography as love is from rape, as dignity is from humiliation, as partnership is from slavery, as pleasure is from pain."

"Blatant or subtle, pornography involves no equal power or mutuality. In fact, much of the tension and drama comes from the clear idea that one person is dominating the other."

The feminist asserted that sexuality, whether both genders issues about same-sex pornography, which include male-male gay sex intercourse. However, she later claimed that the pornography "snuff films" is a threatened to the females.

Steinem's second book, Outrageous Acts and Everyday Rebellions: Second Edition, in which she expresses her phenomenally successful career in journalism. Currently, the price of her book costs $12.89, which consists of 37 used ($2.80) and 28 new ($12.89).

Gloria also wrote many notable books about feminism, including Wonder Woman: Featuring over Five Decades of Great Covers, Moving Beyond Words, and various others.