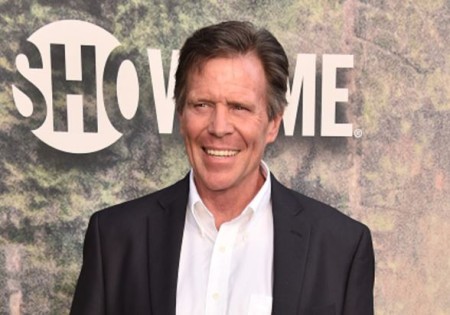 American actor and television host, Grant Goodeve is best known for his role as David Bradford in the comedy-drama, Eight Is Enough. Further, he has also appeared in episodes of the T.V. shows include 7th Heaven, Insight,  Trapper John, One Life to Live, and more.

Grant MacKenzie Goodeve was born on July 6, 1952, in Middlebury, Connecticut, the U.S.A. to Ms. and Mr. Roger Goodeve. So far, he is an American citizen and is of white ethnicity. He is a graduate of Chase Collegiate School.

Over four-decade married life with his spouse, Debbie Ketcham

Grant, who played David Bradford, the oldest son in the television series Eight Is Enough is married to his long term wife, Deborah Lynn Ketcham. They exchanged their wedding vows on May 20, 1978. Their marriage ceremony took place in Windham, Vermont, in front of close family and relatives.

Similarly, Goodeve and Ketchum's engagement was declared by the parents of the bride-to-be, Mr. and Mrs. Frank A. Ketcham. Similarly, this lovely couple dated a couple of years before they tied the knot.

For now, 67, Hollywood actor and his wife, Deborah, have been together for 41 years. Despite being in a lengthy-year marital life, they still frequently appear on the media and shower their love for each other.

By profession, Ms. Deborah is a Studio City, California, photographer. She is also an Alumna of Maryland University and an Honors Graduate of Ithaca College.

The long term couple is parents of three kids. Likewise, from their weddings, they gave birth to two daughters and one son named Katie Goodeve, Emily Goodeve, and Mac Goodeve. In 1989 Goodeve and his wife and three children moved to the Pacific Northwest.

Additionally, the oldest daughter of Goodeve, Katie, is happily married to her husband and also has children. However, her married life remains private or out of the spotlight.

Before marrying Deborah, Dynasty's actor had a love affair with his co-stars, Laurie Jean Walters, in the early 1970s.

Likewise, on the screen, the two played the brother and sister roles in series Eight Is Enough, which aired from 1977 until 1981 on A.B.C., starring Betty Buckley.

However, later Grant and Walters now 73 had parted their ways due to some problems. Moreover, the actress Laurie got hitched to Actor, John Slade, in 1999.

How Rich is Grant Goodeve in Early 2020?

Being an American actor and television host, Goodeve has amassed a considerable amount of money. As of early April 2020, he maintains a net worth of $500,000, which is similar to another actor, Jemar Michael.

Similarly, the average actor salary in the United States, but the range typically falls between $46,901 to $69,501. Thus, he might earn around the same sum. Besides T.V. shows, he has also presented station's travel show Northwest Backroads in 1998 for 16 years.

Goodeve has also served as a voice actor for many video games, including Wolf O'Donnell's appearance in Star Fox: Invasion, Team Fortress 2 Engineer, and other F.E.A.R. voices. He also lent his voice as a singer to the sick holiday CD series of Bob Rivers 'Christmas show.