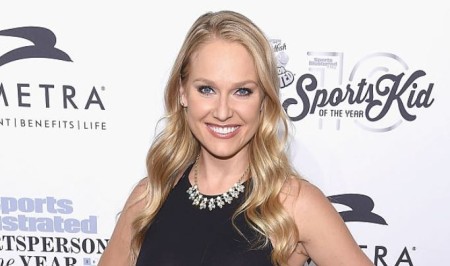 While studying in Clovis West High School, Watney participated in gymnastics, hurdles, diving, and cheerleading. As a National Merit Scholar, she attended the University of San Diego on an academic scholarship. Further, she graduated with honours in Bachelor of Communication and Media Studies in 2003. Let's know the details about her married life and net worth.

The 39-year-old sports reporter is a married woman. She tied her knot with Michael (Mike) Wickham on December 31, 2014. Their wedding ceremony took place at a church in Edgewater, New Jersey. As of now, Heidi and Mike has been married for nearly six years. They have a pet dog named, Yogi.

It is not known when the couple began dating but like Watney, her spouse is also involved in the sports entertainment industry. Therefore, the two might have first met during their professional work. Another MLB's reporter, Alexa Datt is also happily married.

Mike is a baseball executive who previously worked as the director of Baseball Operation for Miami Marlins LLC. Similarly, he has worked as an assistant director for the San Diego Padres. Now, let's know about their role as parents.

Heidi and her husband welcomed their first son, Jaxson on April 26, 2018. Furthermore, Watney announced via Instagram that she is having a second child. The MLB broadcaster revealed the good news on July 22, 2020, with a caption: "We’ve done some growing during this pandemic... another boy arriving this December!"

Watney earns an annual salary of $250,000 and her estimated net worth is $3 million. She has nearly twenty years of working experience in the sports broadcasting profession. Previously, she worked for the Boston Red Sox team as the host of The Red Sox Report and The Ultimate Red Sox Show. There she earned around $62,873 per year.

Since 2012, Watney has been working for as the host and reporter for The MLB Network. The primary source of her income comes from reporting baseball matches and highlights. In the coming future, her earnings will surely rise. Like Watney, Amanda Balionis has also decent net worth.

Before reporting, Heidi worked as a model. She appeared in Dropkick Murphys' music video, Going Out in Style. For your information, Watney competed in the Miss California USA pageant in 2002 and became the first runner-up.

Came from a family of Golfers

Heidi Watney was born on May 19, 1981, in Fresno, California, the United States. One of four children, Heidi was born to father, Mike Watney and mother Paula Watney. Her father coached the Fresno State men's golf team for 35 years. He was inducted into the Golf Coaches Association of America Hall of Fame.

Heidi grew up with her three siblings Josh, Kelly, and Dustin. Josh played golf for Fresno State from 1997-2000, while Kelly was the head women's volleyball coach at Fresno Pacific University. Watney's younger brother, Dustin was born with PraderWilliSyndrome and unfortunately, he died in 2018.

Further, Heidi has a cousin named, Nick Watney, a professional golfer who plays on the PGA Tour. In 2011 he won the AT&T National and made into the top ten of the Official World Golf Ranking.