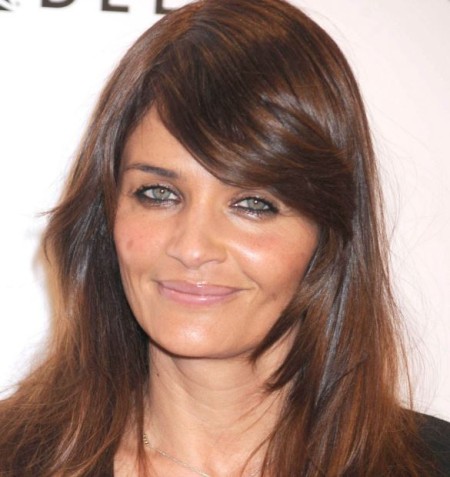 Danish model and photographer, Helena Christensen rose to fame after winning the Miss Universe 1986 pageant. She is also known as the creative director for Nylon magazine.

Recently, Christensen walked the runway of Dolce & Gabanna and featured in their spring/summer advertising campaign with Carla Bruni, Eva Herzigova and Marpessa Hennink in 2019.

Helena Christensen is reportedly unmarried and single as of now. After facing three tragic breaks up, the model seems to enjoy her personal space raising her only son.

Christensen also distances herself from the limelight and rarely made public appearances. However, she is pretty active on Instagram and often shares her daily post with her fans.

Priorly, Helena dated several known personalities from the industry, but all of them ended on a sad note. All her high-profiled relationships details are explained below;

Christensen was romantically involved with an American musician, singer-songwriter and actor, Michael Hutchence. The duo had their first encounter at INXS' live performance where he was playing as a frontman in the early 1990s.

Shortly when the show was over, Helena met him in the backstage and complimented him and his band for their mesmerizing performance. Later, they became friends and started to share their company.

After spending a lovely time together, they expressed their love in 1992. Further, the couple lived in France and Denmark for years. However, after being together for four years, they officially split in 1996.

The Danish model then dated an American actor, TV host and model, Norman Reedus for five years. They first met at a birthday party of a mutual friend, Yelena Yemchuk in 1998 and shortly started dating.

After a year of togetherness, the pair welcomed a lovely son, Mingus Lucien Reedus (born on 13th October 1999). However, their relationship didn't last for long, and they broke up in 2003.

The couple, however, reunited in 2018 for their son graduation and shares pictures on their respective Instagram. Interestingly, Norman praises his ex for being a great mother to his son.

After facing two unsuccessful love life, the former Miss Universe found her companion in Paul Banks who's the lead vocalist for an American rock band, Interpol. They first interact in 2008  and eventually fell in love.

It isn't wrong to say; the couple was one of the most popular pair of the late 2000s with huge media attention and thousand fans from all over the world. But, after 10 years of relationship, things started turning sour, and in mutual understanding, they decided to part ways in early 2018.

Helena Christensen has a whopping bank balance and maintains lucrative assets through her notable works. So, she has a net worth of $8.2 Million as of 2019.

Helena Christensen earns a handsome salary between the range of $8 Thousand to $1 Million from her profession. Having a fruitful wealth, she also collects a bundle of fortune from her other works which include advertisement, photoshoots, etc.

Christensen is running successfully in the modeling industry and receives a hefty sum of payrolls. In one of her Instagram post, she featured in Dolce & Gabbana's fashion dress on 6th July 2019.

Christensen also appeared in the cover of Nylon, Marie Claire, and ELLE magazine. So, she surely received handsome paycheques from the deals.

The brunette model bought a home in the Catskill Mountains near Woodstock, New York at $2.5 Million in 2012.

Christensen's house features a natural pond, four bedrooms, three and a half bathroom, terrace, and a rambling garden. Currently, she is living a lavish life in her luxurious house.

Helena is an active philanthropist who never let a chance to support the environment and needy people. In 2007, she launched the second Fashion Targets Breast Cancer campaign which main motive was to raised money for Ireland's Action Breast Cancer and Europa Donna Ireland to aid women with breast cancer.

In 2009, she partnered with Oxfam, non-profit organization to work on the impact of climate change in Peru which was her mother birthplace. Moreover, the organization was overwhelmed with her presence and said,

"Climate change in Peru is already devastating, and we welcome Helena’s commitment to showing this to the rest of the world."

Since then, the Danish model is active in different social cost, either it for women and children benefits or environment-related.

Visit Married Celeb!!! To Get All The Exciting Gossips & Biographies