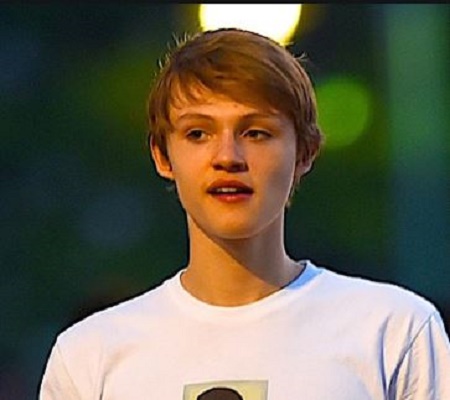 Mingus Lucien Reedus is widely known as the single child of famous American actor Norman Reedus and his model girlfriend, Helena Christensen. Because of being a celebrity children, he has garnered so many attention from the media.

Celebrity son Lucien was born on 13 October 1999. Reedus who graduated in 2018 is of American nationality. Recently, he celebrated his 20th birthday together with his parents. Know more about his relationship status.

Will Mingus Follow The Footstep Of His Actor Father Or Model Mother?

Mingus Lucien Reedus is yet to start his career. As he is one of the famous celebrity kid, many of the fans are waiting to see his career choice. Before that, he's already appeared in fashion weeks as a model.

In 2017, Mingus made his runway debut at New York Fashion Week where he seemed to be parading for American fashion designer, Calvin Klein. This seems like he is already following his mom's footstep. But on can wonder which path he chooses.

According to The New York Post, Mingus parents' Norman and Helena first met at a birthday party through a mutual friend photographer, Yelena Yemchuk. Soon after that they began dating in 1988.

Following year, the former girlfriend-boyfriend couple welcomes a baby boy. They named their only kid Mingus.

Everything was going fine until 2003 when the pair decided to part their ways. After the break-up, they still remained friends. Currently, Norman is in a relationship with Diane Kruger with whom he shares a daughter.

Did Norman And Helena Share Custody Of Their Son, Mingus?

Yes, the actor,  50  and model, 50 still continue to co-parent their son since their separation. Despite busy schedule, they somehow manage to take proper care of their kid.

In 2018, the former couple reunited together for their son graduation. Norman even shared a picture on his Instagram from graduation day and gave a little shout-out to his former wife.

"Props to this lovely lady," The Walking Dead star wrote on Tuesday, "(he graduated!!)."

Not only Norman but the Danish supermodel also posted an image of herself and her former boyfriend, Reedus posing proudly with their child.

In the post, Mingus who wore a black suit and orange shirt looks taller than both his father and mother.

Since 2016, Walking Dead actor and his sweetheart Diane Kruger are sparkling their love life. In 2018, at the Golden Globes, the couple made their rep carpet debut as a couple.

Well, the couple met for the first time back in 2015 on the sets of Sky. Eventually, the lovebirds began their affair.

After dating for months, on 25th December 2018, Norman introduces the world to his new bundle of happiness with Diane by sharing a picture holding a baby's hand.

The star even mentioned his ex-girlfriend Helena and captioned it as:

''A lot to be thankful for this year. this one especially . Love u Diane Mingus.''

Reedus previously dated many known faces. Some of them include Jarah Mariano (2009), Glenn Lovrich(2011), Cecilia Singley( 2013) and his co-star Emily Rebecca Kinney.

Lucien Reedus' father, Norman Reedus has the whopping net worth of $18 million as of 2020. Of course, he accumulated his  assets through his successful multiple careers as an actor, voice actor, television host, and as well as model.

The star likewise is best known for playing the role of Daryl Dixon in popular AMC horror drama series The Walking Dead. His wage per episode of in 2017 was $650,000, but in 2019, it raised to $1 million per episode. Moreover, he shared the screen in the series with renowned stars, including Logan Miller and Macsen Lintz.

On the other hand, Mingus' mother Helena has a net worth of $8 million as of 2020. She earned most of her wealth through modeling. She moreover is the former original Victoria's Secret Angels.

For more updates on Celebrity Children, click on Married Celeb!!!