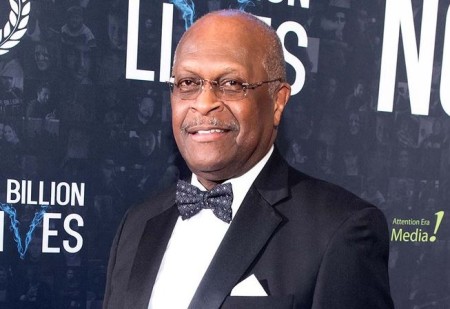 Herman Cain was an American businessman and conservative political pundit who was a Republican presidential nominee in 2012. He reached greater heights despite coming from a humble background. Cain was a successful business executive, although his political career was mesial.

During his career, Cain served as chairman/CEO of Godfather's Pizza, chairman of the Federal Reserve Bank of Kansas City Omaha, president/CEO of the National Restaurant Association. Unfortunately, he died on July 30, 2020, at age 74 due to COVID-19 complications.

Herman Cain was born on December 13, 1945, in Memphis, Tennessee. His mother, Lenora Davis Cain, was a cleaning woman and domestic worker. Likewise, his father, Luther Cain, was a farmer who served as a barber/concierge/chauffeur for Robert W. Woodruff, president of The Coca-Cola Company.

As per Herman, he, along with a brother, grew up in a "poor but prosperous" family environment. His father used to work three jobs in a day. Herman got his high school diploma in 1963. He received his Bachelor of Science degree in Mathematics from Morehouse College in 1967. Likewise, he earned a Master of Science in Computer Science from Purdue University in 1971.

While studying Masters, Cain worked full - time as a ballistics analyst for the U.S. Department of the Navy as a civilian. Afterward, he left the navy and became a computer systems analyst for the Coca-Cola Company.

Herman was married to his longtime wife, Gloria Etchison, from 1968 until his death. They remained married for over fifty years. So, how did they meet? Herman and Gloria first met while Cain was a sophomore at Morehouse, while, Gloria was in her first year at Morris Brown.

Herman fell in love with Gloria, but she wasn’t interested. Nevertheless, Cain was relentless in his pursuit, and eventually, he was able to win her over. In his book, Cain wrote: “It was magic from that moment on, and so I didn’t go out with anyone else. Neither did Gloria. And we dated and dated and dated."

Herman was a outgoing personality, and he often made public appearances. While her husband was alive, Gloria was very supportive of his political career. In an interview, she revealed that it was exhausted to be married to Cain, but she was confident that he would make a good president.

In 2011, Cain was accused by two women of sexual harassment while he was the CEO of the National Restaurant Association. The allegations affected his campaign very badly, although he denied those rumors. Gloria Allred, a civil rights attorney, looked into his case.

The late entrepreneur and politician, Herman Cain had a net worth of $7 million at the time of his death. Cain amassed a majority of his fortune during his service as CEO of Godfather's Pizza.

There is no enough information about how much money Cain used to earn per year. He served as the president and CEO of the National Restaurant Association. Likewise, he was the chief executive and chairman of Godfathers.

In addition to his political and business career, Cain wrote several books about his business and political philosophies. Some of his books are Speak as a Leader: Develop the Better Speaker in You (1999), CEO of Self: You’re in Charge (2001), etc. He also published a memoir called, This Is Herman Cain! in 2011.

We all know the consequences of not following safety habits during the global pandemic of Covid-19. Cain opposed wearing mask, and he even attended the 2020 Trump Tulsa Rally on June 20, 2020. After nine days, he tested positive for coronavirus.

Herman was hospitalized in July and was treated with oxygen in his lungs. It is unknown where Cain contracted the virus. Unfortunately, he died from COVID-19 complications on July 30, 2020, at age 74. His funeral was held at Southwest Atlanta. Do you know in 2006, Cain was diagnosed with Stage IV colon cancer and metastases to his liver?