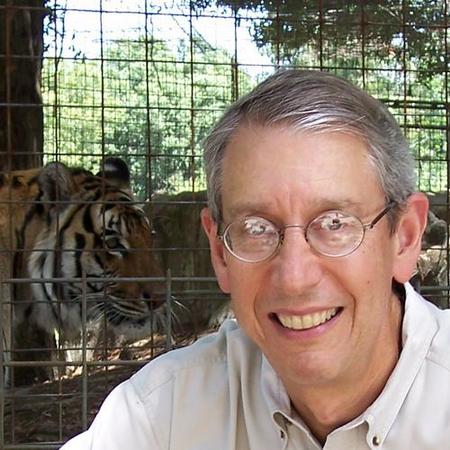 Howard Baskin is an American television personality, secretary, treasurer as well as advisory board chairman at Big Cat Rescue. Moreover, he is also a retired management consultant who spent eleven years at Citicorp in various assignments. Furthermore, Howard is fully working to Big Cat Rescue and serves on the Audit Committee.

Nevertheless, he rose to fame as a celebrity husband of American big-cat rights activist and CEO of Big Cat Rescue, Carole Baskin. Besides, he also appeared in Netflix's documentary series Tiger King in 2020. Do they have children? Let us know more about him in the article written below.

As said before, Howard is a happily married man. Moreover, he is married to his long-time girlfriend turned wife, Carole Baskin. The couple walked down to the aisle and tied the knot in November 2004. Besides, their wedding took place in a private ceremony in the presence of family members and close friends.

Apart, the love birds were in a romantic relationship for more than a year. Moreover, Howard and Carole met for the first time at the kick-off party for the newly formed No More Homeless Pets organization. When Howard joined  Big Cat Rescue as a chairman of the advisory board.

After working together, they felt a special attachment between them. Later, he proposed her in November 2003, and they married the next year. As of now, the duo has been with each other for fifteen years, there is no rumor of their separation and divorce yet.

Well, Howard shares a step-beautiful daughter form her wife's previous married life. Moreover, his wife Carole has a daughter from her first husband, Michael Murdock. However, Carole married life ended with full disappointment and hardship. But, she shares a daughter, Jamie Veronica Murdock, born on July 16, 1980.

His step-daughter, Jamie is an award-winning photographer and also a licensed wildlife rehabilitator. She is currently working as a president for Big Cat Rescue. Apart, we can also see Howard, his wife, and step-daughter, Jamie in Netflix's documentary series Tiger King: Murder, Mayhem, and Madness in 2020.

The six feet (1.82 m) tall, Howard Baskin has earned a decent amount of money from his career. Furthermore, he has an estimated net worth of $1.5 million as of 2020. Joe Exotic is a well-known American former zoo operator and convicted Felon with a $10 Million net worth.

Moreover, the main source of his earning is from investment and the worth of Big Cat Rescue. On the other hand, his wife, Carole has an estimated net worth of $2 million. As of now, Howard is living a lavish life with his wife by rescuing Big-Cats.

Howard Baskin was born on May 13, 1950, in Poughkeepsie, New York, USA. However, his parents' and siblings' information is not available right now. He holds an American nationality and belongs to white ethnicity.