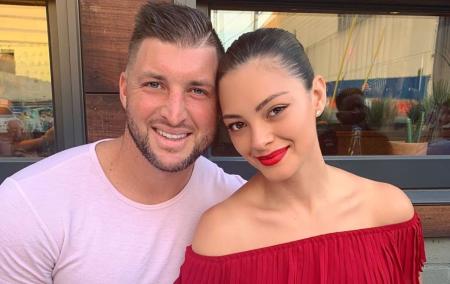 Before the wedding ceremony, Tebow said that he wanted a perfect wedding location and timing for the perfect start of their new life. All the things made it so comfortable with the help of The Knot wedding planning group, whom Tim and Demi registered to reflect the best at their nuptial.

During an interview with People magazine, Tebow said that he wanted the wows to be perfect because he is leaving in the traditional things for example, "till death do us part" and added some more stuff of himself in his marriage with Demi-Leigh.

At the time of their wedding ceremony, they invited more than 260 guests, including Tebow's former football teammates and Nel-Peters' relatives. They walked down the aisle approximately at 5:30 p.m in the South African cultures and traditions.

What's more to this? the bride, Demi-Leigh wore a white custom-made sleeveless wedding gown, designed and furnished by David's Bridal. She also donned a diamond and pearl earrings, which was bought from Marion Rehwinkel Jewelery. Nel-Peters told that she chose the best gown from overall 50 dresses because she wanted to look up for "something sleek and elegant and timeless."

On the other side, the pro baseballer, Tebow was dressed in a well manner, where he chose a slim-fit black tuxedo and an inner white shirt, tied up with a black bow tie and a black handkerchief on his left pocket, designed by Antar Levar. His groomsmen were also suited in Indochina-made tuxedos.

The bridegroom's wedding menu was quite interesting due to the mix of American and South African cuisine, which include steak, mussels, assorted cheeses, and grilled pasta. Likewise, the bridal chose their favorite salad, including baby spinach, bacon, berries, cucumbers vinegar, and olive oil.

The bridal also gave an astonishing favor to their guests with their wedding cake before attending their reception. The delicious cake was made with cheese so that Tim can stick to his regular diet, and the guests will also taste the Keto-friendly dessert.

The married pair later held a wedding reception for their beloved guests. Tebow also said that he wanted three things at his wedding, first to see Demi-Leigh in traditional dress, second to memorize their first kiss, and third is to dance together. So, Tebow's three wishes are accomplished now with a lifetime experience of his memorable wedding.

Tebow had their first encounter with the 2017 Miss Universe winner, Nel-Peters though his event, Night to Shine, which is a part of his non-profit organization, Tim Tebow Foundation in 2018. Shortly after having a sweet conversation, they started dating and subsequently announced their engagement on 10th January 2019. Since then, the rest is history.

Similar to Tebow and Demi-Leigh's marriage, some other celebrities like Devanne Villarreal and Davante Adams are also committed to a happy marital relationship.