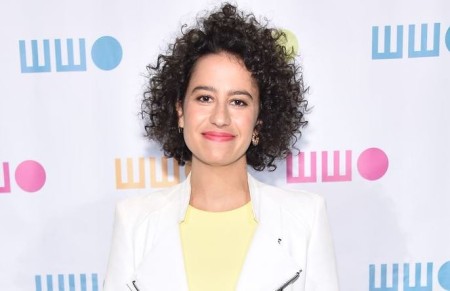 In stand-up we see men mostly taking up the stage, but there are women like Ilana Glazer whose comedy is exceptionally brilliant. Over the past few years, more talented ladies have been establishing themselves. Likewise, the 33-year-old, Glazer is a popular comedian, director, producer, writer, and actress.

Ilana debuted with her stand-up comedy special, The Planet is Burning in January 2020. Further, she is the co-creator and co-actor of the Comedy Central series, Broad City. Glazer identifies herself as queer and there are more interesting facts about her personal life.

Married to a Scientist

The much-loved comedian is a married woman. Ilana Glazer wed her longtime boyfriend, David Rooklin in February 2017. Further, their marriage took place in New York in a private civil service ceremony. The couple has been married for nearly four years as of 2021.

Iliana and her husband don't share any children. The pair who are in their 30s are currently busy in their respective careers. Glazer is a fun-loving and outgoing personality, while, Rooklin is a bit, shy person. However, the comedian seems to have helped her spouse become an extrovert.

One is a molecular scientist, while the other is a comedian. Not a likely couple, but Ilana and David are living their best life as partners. They both enjoy each other's companies.

It seems Glazer is fond of science as she visits her husband's workplace often checking the cool instruments. Meanwhile, David accompanies her to exotic events, parties, and shows.

So, how did they meet? Ilana and David could have met while studying at New York University. The actress graduated from NYU in 2009, while, Rooklin completed his doctorate in Computational Biology from 2006-2012. However, it is not known when exactly they began dating.

Talking about Rooklin, he is the co-founder of Redesign Science. From 2006-2017, he worked at NYU in various positions including teaching assistant and postdoctoral research scientist. David has a Ph.D. in molecular modeling.

As a Proud Queer Woman

Ilana is open about her sexuality just like Tiny Pretty Things' actor, Brennan Clost. She identifies herself as a queer woman and has lots of friends belonging to the LGBTQIA community. Glazer credits Broad City with helping her understand her sexuality.

After coming out, Ilana became more active on raising awareness. The Critics' Choice Television Awards nominee, Ilana uses her voice against brutality among people who suffer from sexual and racial injustice.

Ilana Glazer has a net worth of $6 million as per celebrity net worth. She has been active in the entertainment industry since 2006. Over her 15 years of professional career, Glazer has appeared in hit tv shows and blockbuster movies.

To date, Ilana has worked in only a few movies. She appeared in the 2015 movie, The Night Before which collected $52.4 million at the Box-Office. Likewise, the 2017 movie, Rough Night collected $47.3 million.

Talking about her television credits, Ilana rose to fame after appearing as a lead in the series, Broad City. She co-created and co-starred alongside Abbi Jacobson. For her role, Ilana earned two nominations for the Critics' Choice Television Award for Best Actress. In 2018, she appeared in RuPaul's Drag Race, a series created by a famous drag queen, RuPaul.