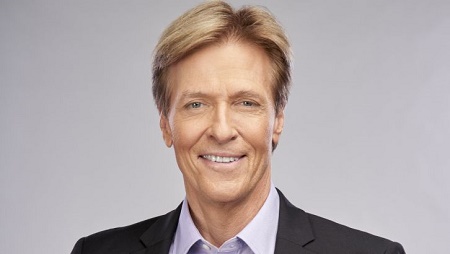 American actor, Jack Wagner was once married to actress, Kristina Wagner, his co-star from General Hospital. This exes got immense popularity when they both played the roles of Frisco and Felicia on the soap operas show, whose on-screen chemistry was undeniable.

However, the 80's super couple, Jack and Kristina got officially divorced in 2006 after 6 years of union. Further, they share two sons named Harrison Wagner, 25, Peter Wagner, 29. So, let's talk about their unsuccessful married life in the following sections.

Were Together for About 13 Years

The couple who first met on the set of ABC daytime drama series General Hospital started dating privately after only a few months of play-acting. The couple realized that something extra special existed between them.

Well, maybe a few months of on and off romance, they welcomed their first-born son, Peter Wagner on September 4, 1990. And after so many emotional ups and downs, on 18 December 1993, the lovebirds agreed to take the marriage plunge.

The wedding was celebrated in Lake Tahoe, California, at Love Wedding Chapel. A year later they welcomed another son, Harrison Wagner, who was born in their family on 1 December 1994.

The couple filed a petition for divorce in February of 2001, alleging "irreconcilable differences. But the documents that resulted were never signed and were reconciled after two years apart in 2004.

Again after marital problems one year later, another petition was again filed, and the divorce was finalized in 2006. And the actress Kristina says that their divorce was the best thing for her and also significant for the well-being of her children, Peter and Harrison. She explained:

"The divorce was the best thing that could have happened to me, and for my children as well,". "I don't think I was being a very good mother at the time, either. I wasn't making good choices."

And the couple has continued to work together as co-parents and co-stars following their split. But Kristina Kay Crump wasn't really able to meet face-to-face with him and wasn't in Jack's right position to heal. Finally, by 2015, all the issues between the two had been resolved.

Was Engaged to Heather Locklear

Following the divorce with ex-wife Kristina, in 2007, he started dating an American actress, Heather Locklear, who is 58 years old now. She is best known for her character as Amanda Woodward on Melrose Place (1993-99), as Sammy Jo Carrington on Dynasty (1981-1989), among others.

They became engaged in August 2011, after dating for 4 years. However, on 15 November 2011, Jack and his fiance called off their engagement. Moreover, Wagner has dated his former The Brave and the Lovely co-star Ashley Jones, 43. From 2013 till 2015 they dated each other.

Peter John Wagner II aka Jack Wagner is the dad of Kerry Wagner, who is 23. He first met his daughter Kerry in November 2011 at a Florida concert, for the first time. And the moment was no less surprising.

The daughter Kerry was actually from a woman whom Jack had a one-night stand. His unknown girlfriend had given birth to a baby girl and was put Kelly for adoption due to her economic conditions

Eventually, the father and daughter came face to face more than two decades later. After meeting, the two even spent five days together, getting to know each other and bonding. And the two have also done a DNA check. "She's my daughter," says Wagner.

Renee Portnoy and David Portnoy Married life. Are they back together?

Is Frankie Valli's Former Wife Randy Clohessy in a Relationship or Not?

Was Catherine Hawn Marriage Ended Up In Good Term?