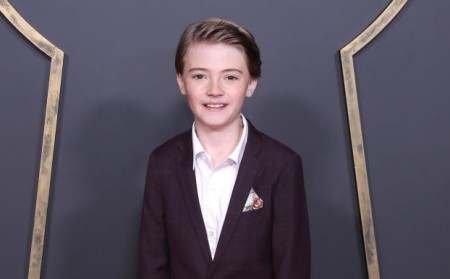 The scene from the 2017 supernatural movie "It," where "Pennywise the Dancing Clown" drags Georgie into the sewer, is extremely terrifying. The child actor who portrayed the role of Bill's six-year-old brother in the movie is Jackson Robert Scott. He also appeared in the sequel, "It Chapter Two." His major role in a feature film was in the 2019 horror, "The Prodigy."

Jackson (11) was born on September 18, 2008, in Arizona, U.S.A. He played a leading role of Bode Locke in the Netflix series, 'Locke & Key.' His role as the youngest son of the Locke family earned him critical acclaim alongside actors such as Darby Stanchfield.

Jackson Loves to Spend Time with his Family and Friends

The child actor is currently is too young for his age to get involved in love affairs or dating anyone. The talented kid is instead focused on building his career and studies.

Looking through his Instagram account, Scott has an immense love for dogs and has a puppy named Goldie Girl. Scott, moreover, spends time with his parents and friends visiting different destinations. Jackson Robert has a sister named Addison Scott.

Scott learned his acting techniques while he was part of the CGTV acting program. His breakout role was in the 2015 TV series, 'Criminal Minds.' He later portrayed the character of Georgie in the 2017 film, It Chapter One and it's sequel.

Watch the trailer of the 2019 film, The Prodigy!

His co-star, Bill Skarsgård, received critical praise for the portrayal of Pennywise the Dancing Clown. For your information, Bill is the fourth son of the famous actor, Stellan Skarsgard, and his ex-wife, My Skarsgard. Additionally, Scott's first major role in a feature film was the 2019 film, 'The Prodigy.'

Jackson's leading role as a young actor in Locke & Key

Scott was cast as Bode Locke, one of the leading young actors in the Hulu series, Locke & Key. After Hulu TV declined to order the series, Netflix redeveloped the show with a new cast. He was the only actor who wasn't replaced.

In the show, Locke & Key, Nina Locke's role was previously played by Miranda Otto in the 2011 Fox pilot and by Frances O' Connor in the Hulu pilot.

The exact amount of this young actor's net worth is unavailable. He still has a lot to achieve in the entertainment industry. However, Scott's earnings per movie and TV shows can be estimated.

The average salary for a young actor ranges from $20,000-$40,000. Hence by assumptions, Scott might have earned similarly. Some of his movies have grossed an excellent revenue. Here take a look:

In the coming future, Scott might bag major roles; hence his net worth and income will undoubtedly rise.