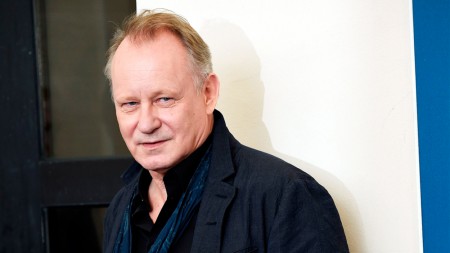 Actors create different persona on-screen with their realistic portrayal and variation of characters. One such respected actor is the 68-year-old Stellan Skarsgard who has won Best Actor award on multiple occasions.

A few of Skarsgard's memorable roles include movies such as  Good Will Hunting, Pirates of the Caribbean, Mamma Mia!, Thor franchise, Avengers: Age of Ultron and the HBO/Sky Uk tv miniseries, Chernobyl.

Married to a Younger Woman

The popular actor in the Hollywood movie industry, Stellan Skarsgard is a married man. He has been married twice and is currently living with his second wife, Megan Everett. The couple exchanged their wedding vows on July 12, 2009, and their marital solidarity has crossed over ten years as of 2019.

Stellan and his spouse, Megan share two children from their marriage. They welcomed their first child, a son named Ossian on April 26, 2009. Similarly, their second child, a son Kolbjorn, was born on August 24, 2012.

Just for the information, Megan is a screenwriter and a children's book author based in Stockholm, Sweden. Stellan and Megan have a huge age gap of 25 years. She was born in 1976, while Skarsgard was born in 1951. However, the pair doesn't seem to be bothered by their age difference.

Why Stellan Divorced with His First Wife?

The Swedish actor, Stellan, was previously married to My Skarsgard. The 63-year-old, My Skarsgard, was a Swedish Physician who was also an actress. The former couple were married on April 27, 1975.

Four of Skarsgard's children have followed the footsteps of their father. The oldest child, Alexander who is now 43 years old, is an actor. He is known for his roles on the HBO series, 'True Blood.'

Gustaf, the second child, is known for his role on the History channel series, 'Vikings.' The fourth child, Bill portrayed Pennywise the Dancing Clown in the supernatural horror films 'It' and it's a sequel. The sixth child, Valter, is also an actor known for films like 'Lords of Chaos,' 'Fun House,' etc.

The 71st Primetime Emmy Awards was held on September 22, 2019, at the Microsoft Theater in Los Angeles, California. Fleabag, a British comedy-drama series, won the most significant awards followed by the 2019 historical miniseries, Chernobyl with three including outstanding Limited Series.

For his role as Boris Shcherbina, actor, Stellan Skarsgard was nominated for Outstanding Supporting Actor in a Limited Series or Movie.

The Chernobyl series actor, Stellan Skarsgard, enjoys a net worth of $40 million. He is one of the well-established performers and became known to American audiences after appearing in Good Will Hunting and Breaking the Waves.

From the movie industry, Stellan earns an annual income of over $6 million. The primary source of his wealth comes from acting in films and television shows. Also, he is among the wealthiest celebrities. Hence, he lives a lavish lifestyle as he can afford luxury cars, fancy dress, beautiful homes.

Most of the movies in which Stellan had a pivotal role are a box-office success. The movies such as Pirates of the Caribbean: Dead Man's Chest, The Avengers, and Avengers: Age of Ultron proved to be blockbuster which grossed over $1 billion at the box-office.

He generated an enormous wealth from his Stockholm restaurants, his Football Team Gothenburg Angels, his own brand of Vodka, as well as his With Love from Stellan perfume and a fashion-clothing line called Stellan Skarsgård Seduction.

Do visit Marriedceleb for more Gossips and Biographies!!!