Verified by our team
Presenter and Reporter
Fri Aug 16 2019
By   Selena
Shares :

Who is James Coomarasamy?

Do you know the BBC World Service program Newshour? Then you might be familiar with the name James Coomarasamy. Well, he is a British presenter who was active in the journalism field for a long time.

James Coomarasamy was born to the parents of  English and Sri Lankan ancestry in London. Sadly, his actual birth date, birthday, and age is not available to the media. He holds British citizenship and belongs to mixed ethnicity. Concerning his education, Coomarasamy went to Christ's Hospital School in Horsham, West Sussex. He also studied at the University of Cambridge in modern and medieval languages. Moreover, he speaks some Polish and is fluent in French and Russian. 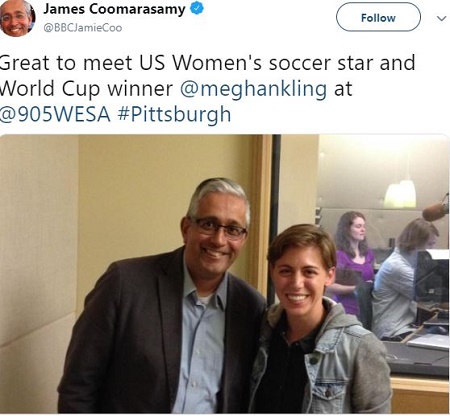 In 1991, Coomarasamy started working in the BBC Moscow bureau as a production assistant which he freelanced as a reporter-producer in Moscow. He also served as the BBC correspondent covering events in Poland, the Baltics and Ukraine in Warsaw in November 1997.

James also presented Europe Today in 2009. Moreover, he was BBC Washington Correspondent during 2005-2009 and also covered Hurricane Katrina and Obama's election. Not to mention, Lisa LaFlamme also covered the hurricane. In 2010, he joined the presentation team for Newshour along with Roger Hearing and Philippa Thomas on the BBC World Service. Likewise, Coomarasamy has a ridiculous memory for pop music trivia and patronymics of famous Russians.

Who is James Coomarasamy's Wife?

Well, BBC presenter James Coomarasamy is a married man. Then you guys are curious to know who his wife is? Well, his love of life is Nanette. However, the information about James' former wife is confined. 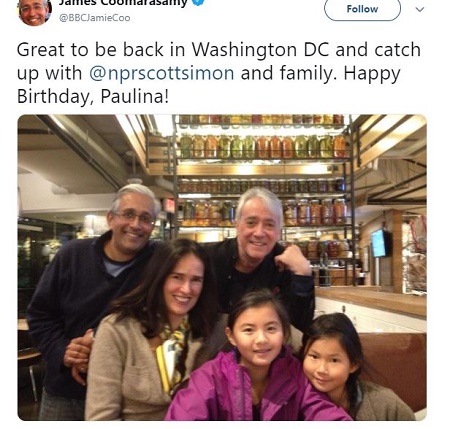 Image: James Coomarasamy posted a picture via Twitter back on 2 Nov 2014 with his family

Sadly, the former couple has kept their marital details away from the limelight or media. Thus, it's difficult to say when they tied the wedding knot and the exact place of their marriage. They might be enjoyed their love life for several years before tying the knot.

When did they divorce?

As per Wikipedia, the couple had already been separated. But till date, the actual date of their separation is not known to the media as well as James and his former partner haven't disclosed any other details behind their divorce.

From their marital relationship, James and Nanette shares two children, a son and a daughter, Maya. 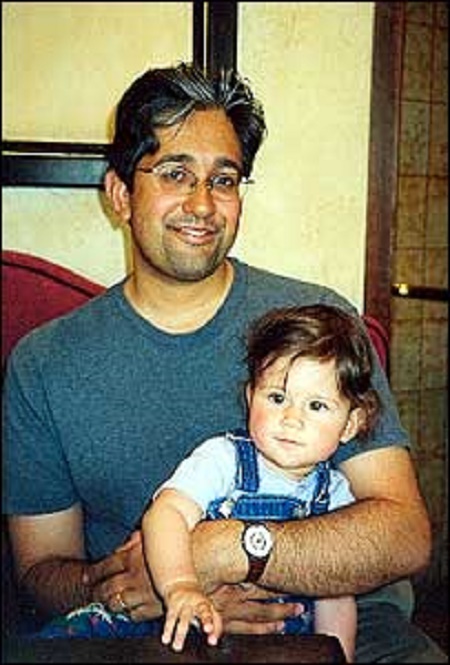 However, the other information regarding their children isn't disclosed to the public or media. Nevertheless, the kids of James is living a healthy life.

Net Worth And Salary?

British presenter, James Coomarasamy's exact net worth is under review. However, he has collected a decent amount of money from his professional journalism career. Being active in the broadcasting industry since 2010 he has received fame and name as well as a hefty sum of money. 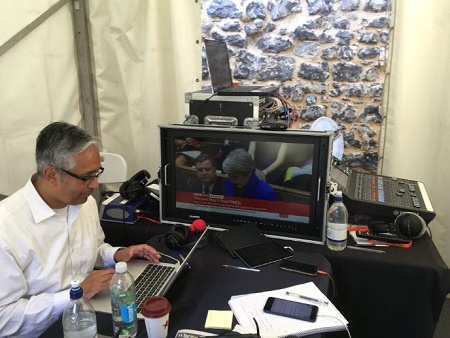 As per payscale, the average salary of a Newshour TV presenter is between $62,763 to $100,512 per annum, but it depends upon the work of the employees at BBC. Being an experienced reporter, James may receive a salary of around $75,000 annually.