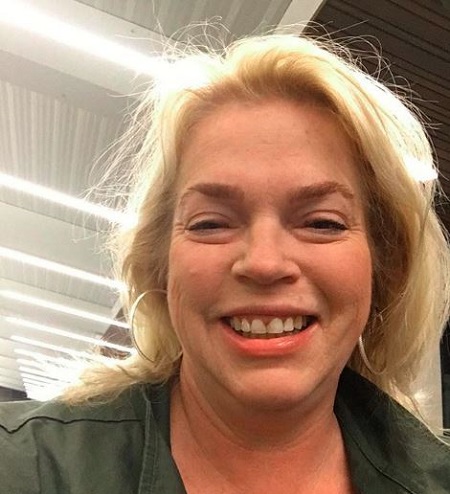 Janelle Brown is an American author and reality TV star who rapidly rose to stardom as the second wife of American TV personality, Kody Brown. She starred on the hit TLC series Sister Wives alongside her family members. Also, she has her own online series Janelle Brown's Weight Loss Diary, which was released through TLC.

She was born on 6 May 1969 in the United States as Janelle S. Schriever. Her mother is Sherly Usher while her father Robert Brown passed away in 1972 when she was 3. Further, she has a sister whose name is missing. Her mom Sherly was married to Kody's late father William Winn Brown, died on 24 August 2013. So far, she is a graduate of Bountiful High School.

Before becoming Kody’s second wife, Janelle was previously in a monogamous marital relationship with Adam Barber who is the brother of Meri Brown. The former spouses tied the knot in April 1988 in a private ceremony at Salt Lake City, Utah, United States.

Actually, the couple were still teenagers during their togetherness. So they did not have any children together. Two years later, they ended their marriage in June 1990. Some sources claim that Janelle had reportedly cheated on Adam for Kody as she was fell in love when she was still married to him.

But she has implied that they mutually decided to end the matrimony because it wasn’t a good fit.

She met her future husband Kody Brown in 1989, through her first hubby's sister Meri. But after their divorce with Adam, it took her three years to join the family of Brown.

Despite not tying the knot until 1993, they decided to enter an official courtship. Then they exchanged the wedding vows in a spiritual ceremony on January 20, 1993. But before Janelle, the 51 years old Brown was legally wedded to Meri Barber on April 21, 1990. They have one daughter Mariah Brown.

They had divorced in September 2014 after Janelle and Kody's marriage. Later he went to marry spiritually for the third times with Christine Brown on March 24, 1994. They have six children together named Mykelti Brown, Aspyn Brown, Paedon Brown, Gwendlyn Brown, Truely Brown, and Ysabel Brown.

After Christine, he tied the knot fourth times with Robyn Brown on May 22, 2010. But again the duo was legally got hitched in December 2014. After marriage, Kody adopted Robyn's three children Dayton, Aurora, Solomon, Breanna, from her past husband David Preston Jessop.

They have one biological daughter Ariella Mae Brown, 4.

She is a Mother Of Six and Grandmother of Two

Their daughter Madison, aged got married to her husband, Caleb Brush, the son of Diana Barkley and Mike Brush. Together, they have one son, Axel James Brush, born on May 20, 2017, at 12:13 a.m. and one daughter Evangelynn Kodi Brush on August 20, 2019.

On the other hand, the couple' son Logan got engaged to his girlfriend, Michelle Petty on September 15, 2017. Apart from that, she was diagnosed with a type of skin cancer called Basal Cell Carcinoma in a pandemic.

As of 2020, Janelle has an estimated net worth of $400 thousand. She has accumulated her fortune throughout her career as a reality TV star. While her husband, Kody Brown's net value is around $800,000.

As far as her salary, Brown takes home in the range between $25,000 to $40,000 for her appearances on Madison's family drama series, Sister Wives. The show was premiered on September 26, 2010. It includes Kody's four wives, Christine, Meri, Robyn, Janelle, and their 18 children.

As an author, she has published a book Becoming Sister Wives: The Story of an Unconventional Marriage in May 2012 with Robyn, Meri, Kody, and Christine Brown.