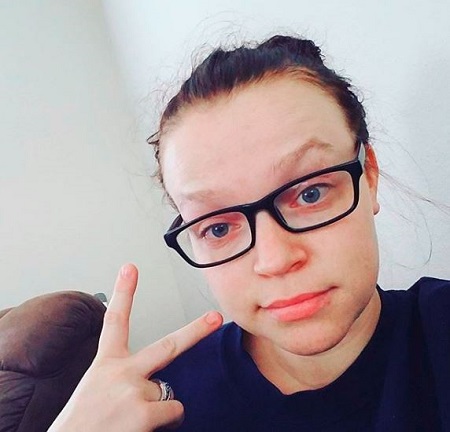 If you are a regular viewer of American reality television series, Sister Wives on TLC? Then Madison Brown is familiar to you who is starring as a regular cast member since September 26, 2010. The show has 4 episodes in total and season 14 premiered on January 5, 2020.

She was born on November 3, 1995, in Lehi, Utah, the United States as Maddie Brown. She is the second child of TV personality, Kody Brown, and his second wife, Janelle Brown. Altogether, she has 7 brothers and 10 sisters but three of them are adopted. Her dad is married to Meri, Janelle, Christine, and Robyn. So far, she studied at Centennial High School and Utah State University.

Who is Madison Brown's Married?

The 24 years reality TV star, Madison is happily married to her husband, Caleb Brush, the son of Diana Barkley and Mike Brush. He works now in mine equipment repair.

Brown and Brush whose age is 33, tied the wedding knot on Saturday, June 4, 2016, in an intimate outdoor ceremony. They said yes I do in front of dozens of guests in Bozeman, Montana.

During their nuptials function, the beautiful bride Maddie donned a strapless white gown. They had five bridesmaids and five groomsmen altogether. In fact, their wedding was featured on the Sister Wives episode Maddie Gets Married.

At the moment, it is still unclear when and how they first met. Now, they have celebrated their four years of marriage anniversary on June 4, 2020.

She is a Mother of Axel and Evangalynn

Madison and her partner, Caleb are blessed with two little kids. At first, the couple revealed on November 21, 2016, that they were expecting their first child together. Finally, their eldest child or baby boy Axel James arrived on May 20, 2017, at 12:13 a.m.

But, Evangalynn underwent amputation surgery in August 2020, Because she was diagnosed with tibial campomelic, fibular aplasia, and oligosyndactyly (FATCO) syndrome since her birth. But the cause is unknown.

Now after her successful operation, she is now home and recovering beautifully.

How Wealthy Is Madison Brown?

As of 2020, Madison has an estimated net worth of $400 thousand. She has accumulated her fortune throughout her career as a reality TV star. While her dad, Kody Brown's net value is around $800,000.