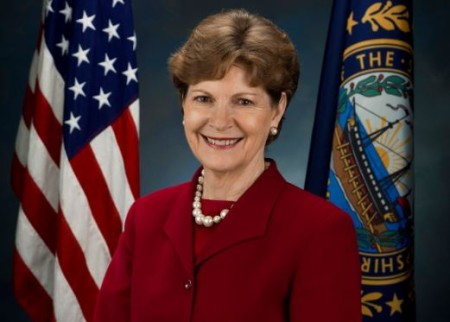 Jeanne Shaheen is an American politician who is currently the senior United States senator from New Hampshire. She is the first woman to be elected as both a governor and a U.S. senator in American history. Jeanne served as the 78th governor of New Hampshire from 1997 until 2003.

Cynthia Jeanne Bowers was born on January 28, 1947, in St. Charles, Missouri, the United States. She is 73 years old as of 2020. Jeanne was born to parents, Belle Ernestine (mother), and Ivan E. Bowers (father). She graduated with a Bachelor's in English from the Shippensburg University of Pennsylvania. Likewise, she has a master's degree in political science from the University of Mississippi.

Jeanne has been married to her longtime husband, Bill Shaheen, since 1972. They first met in 1969 in a little town of York, Maine. Further, the couple has been married for 48 years as of 2020. Jeanne and her spouse Bill share three daughters, Stefany, Stacey, and Molly Shaheen.

Like Jeanne, Bill himself is an accomplished attorney and democratic party leader. He is a Lebanese-American attorney and political operative. Bill recently won his third team as Democratic National Committeeman from New Hampshire.

Bill has hosted many presidential candidates during the 2020 primary campaign before deciding to endorse former Vice president, Joe Biden. He has been active in state Democratic politics since 1976.

Jeanne and her husband are one of the influential politicians in New Hampshire. The pair actively participates in different community campaigns and charities.

The oldest of three, Stefany was born in 1974. She is currently the co-founder and president of a Boston based company called Good Measures. Stefany is also a New York Times best selling author. She is married to her husband, Craig, and they have four kids.

Likewise, Stacey is a corporate lawyer and works at her father's office, Shaheen & Gordon. She began her career as a law clerk for the New Hampshire Supreme Court. Stacey is also married and shares three kids with her husband, Ryan Bellabona.

The youngest daughter, Molly, is the co-founder of a clothing brand called, State & Manor. Her husband, Huw James Collins, is an actor. The couple is also a founder of a luxury lifestyle boutique called, Wheat which they opened in 2017.

Jeanne is a former small business owner. She and her husband jointly pay taxes, and their assets are worth somewhere between $4 million-$9 million. In 2008, Jeanne had a net worth of $3.4 million, which increased up to $5.4 million in 2012. The same year, Jeanne earned around $580,000 between her senate salary and her husband's law firm.

As per sources, Jeanne and her spouse investments and stocks in several firms. Therefore, the couple without a doubt can afford a lavish lifestyle. In the U.S Senate, Kelly Loeffler is currently the wealthiest member of congress.