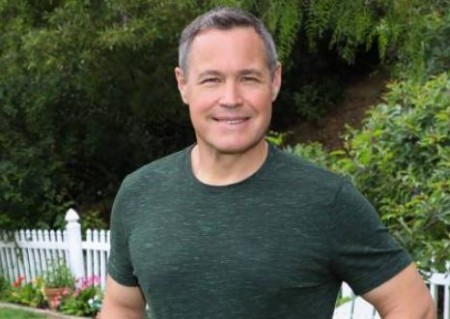 Jeff Corwin is a three-time Emmy award-winning wildlife biologist. The certified Advanced Field Medical Specialist, Corwin is best known as the host of Disney's "Going Wild with Jeff Corwin", Animal Planet's "The Jeff Corwin Experience", and ABC's "Ocean Treks with Jeff Corwin." Besides, he made a movie titled "Expedition Chesapeake, A Journey of Discovery" in 2019.

Jeffrey Scott Corwin was born on July 11, 1967, in Norwell, Massachusetts, the U.S. He attended Bridgewater State University in Bridgewater and has dual Bachelor's degrees in Biology and Anthropology.

Jeff earned a Master of Science degree in wildlife and fisheries conservation from the University of Massachusettes Amherst. Also, he received an honorary doctorate in public education from Bridgewater University.

The 52-year-old, Jeff Corwin is married to his longtime wife, Natasha Soultanova-Corwin. The couple has been married for 24 years as of 2020. So, how did the couple met? When they got married?

Well, Jeff first met his wife in 1996 while shopping in a local market in Cambridge. He instantly felt a connection with his future spouse, and so did Natasha. After three months of meeting, the couple exchanged their wedding vows. Corwin's wife is Russian, and she grew up in Germany.

Further, the husband-wife duo shares two children. Their first daughter, Maya Rose, was born on July 6, 2003. Similarly, their second daughter, Marina, was born on September 11, 2008. The family of four currently resides in a beautiful lake house in Massachusetts.

Talking about Natasha, there is not much information available, but she is a loving and caring wife. She and Jeff were students while they were newly married. However, Natasha left her undergraduate studies and funded her husband's education. Later, Natasha did her PhD in comparative literature.

The conservationist and animal expert, Jeff Corwin has a net worth of $3.5 million as per celebritynetworth. Jeff earns a decent sum of money as a biologist. An additional source of income comes from his role as a tv host and producer. Like Corwin, another conservationist, Bindi Irwin also has a desirable income.

The average salary for biologist ranges somewhere between $48,333-$72,873 per year. Additionally, Jeff, as a television host, earned around $38,644 from one television show. Through his career, the Snake Boy has collected an impressive fortune.

Corwin works as a speaker of animal rights advocate as well. He has done several seminars, campaigns, and talk shows about protecting the welfare of animals. For his work, Corwin has received three Emmy Awards.

As a Biologist and Conservationist

As Jeff studied wildlife, he always wanted to pursue a career in that field. Therefore, in 1994, he got a chance to work as an expedition naturalist for a documentary called, The Jason Project. Since 2020, he has been presenting a series, "Ocean Treks with Jeff" on ABC.

Jeff has amassed pretty amazing titles as well. He was named one of Entertainment Weekly's Top 10 people to watch in Television. In 2002, he was listed as one of the "50 Most Beautiful People in the World."