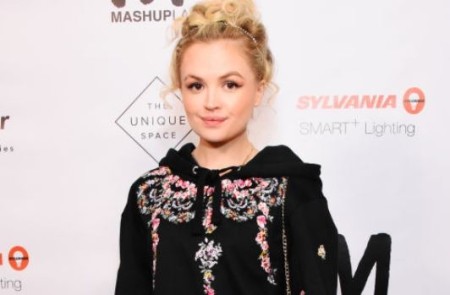 Jessica Amlee is a well-known television and film actress known for playing Jackie Sanders in Netflix's "Greenhouse Academy" and Mallory Wells in CBC's "Heartland." Her notable movie credits include the 2003 drama film, "My Life Without Me" and the  2007 thriller-horror film, "Beneath."

Jessica Kelsey Amlee was born on July 17, 1994, in Vancouver, British Columbia, Canada. She is 26-years-old and has a brother named, Mason. Jessica was born to parents, Douglas Amlee (father) and Steffie Amlee (mother). She is the granddaughter of renowned jazz saxophonist, P.J. Perry. In 2016, the Governor-General of Canada awarded Perry the Order of Canada.

The 1.6m tall actress is currently single and isn't dating anyone. Also, Amlee hasn't hinted if she will marry anytime soon or not. It seems Jessica is much focused on making a name for herself on big screens. Further, she is far away from any media rumours and speculations as well.

For your information, Jessica has been in a relationship before. She dated Australian actor, David John-Roberts. The 30-year-old, David is best known for his role as Xavier Austin in the soap opera, Home and Away. The former couple decided to split in early or mid-2019. However, the timeline of their romantic history is under the shadow.

Back in September 2018, David survived a horrific motorcycle accident in Los Angeles. At the time he was living together with Jessica in an apartment. Unlike Amlee, her Heartland co-actor, Graham Wardle is happily married to Allison Wardle.

The Heartland actress, Jessica Amlee has a net worth of $500,000 similar to her Greenhouse Academy co-star, Ariel Mortman. Amlee is mostly active on television. She has acted for Sony Productions and Netflix Originals. As a television actor, Amlee earns around $23,673 per episode.

Apart from acting, Amlee works as a women and child's rights activist. On her website, she has written about The Empathy Project, which raises awareness on sex trafficking and child abuse.

Jessica grew up developing a strong interest in acting. At 5, she told her mother about her dream of becoming an actress. Then Steffie took her daughter to several auditions, but Jessica got an opportunity after quite a struggle.

Watch Jessica Amlee's interview about her character on Heartland!

By the time, Jessica was 11; she had already appeared in over 50 commercial projects. Also, she got to travel a lot at such a young age. Jessica was just 13 years old when she first appeared in Heartland. Actors like Shaun Johnston, Nathaniel Arcand, Helen Colliander, etc. also worked on the series.

At an early age, Amlee appeared with guest-starring roles in many tv shows. Then she slowly transitioned into the movie industry. In 2007, she appeared as Amy in the horror-thriller film, Beneath. On February 17, 2020, Jessica revealed about working on a new film titled, The Runner.