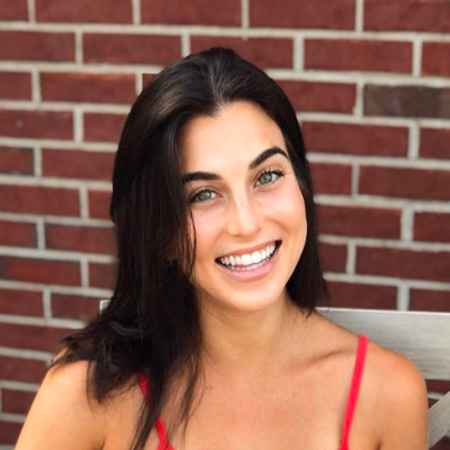 Today's article is about Jessica Clarke, who is famous for being a long time girlfriend turned fiance of The Bachelor show star, Ben Higgins. Besides, Jessica is an American entrepreneur and athletic by her profession. Moreover, Jessica and Ben's relationship started when Ben slid into Jess's DMs after seeing her photo at a hockey game. Further, Clarke is also co-owner of two gyms located in Nashville and Denver. Apart, she also made her television debut with her fiance, Ben in an episode of "The Bachelor: The Greatest Season-Ever!" in June 2020.

Jessica Clarke was born on June 19, 1995, in Nashville, United States of America. She is the daughter of Jay Clarke and Jill Clarke. Her father is the president and CEO of Magazines.com and her mother is an associate with HBO and Company in Atlanta. She grew up and raised with her three siblings, two brothers, Jim Clarke and Philip Clarke, and a sister Amy Clarke. She has completed her college from the University of Mississippi. Apart, she also runs track and was a mage-athlete in her high school. Later, she again attended school to get her certification to be an aesthetician.

Well, Jessica, 25, is in a romantic relationship with her fiance. Moreover, Jessica is engaged to her long time boyfriend turned fiance, Ben Higgins. Further, Ben is a famous reality star of the show The Bachelor. Jessica and Ben's relationship started when Ben slid into Jess's DMs after seeing her photo at a hockey game in 2018 according to People.

However, the duo dated each other for several months before announcing their relationship in public in February 2019. Since after the announcement, the love birds often share a lovely picture on their respective social media account.

On the other hand, the couple finally took a big step in their relationship. They got engaged in March 2020. Moreover, the duo shares happiness with fans by posting a picture on their respective social media account. As of now, the couple is just enjoying their happy life.

Who is Jessica's fiancee Ben Higgins?

Ben Higgins was born on March 23, 1989, in Warsaw, Indiana. Currently, he is 31 years old. He is an American reality television star who is famous for appearing in the 20th season of ABC's The Bachelor show. Moreover, the winner of the show was Lauren Bushnell, a flight attendant who ultimately became Higgins's fiancee.

But, their relationship didn't last for the long. Besides, they called off their engagement on May 15, 2017. As of now, Ben is engaged with Jessica, and Lauren is living a happy married life with Chris Lane.

On the other hand, Higgins also appeared in the 11th season of The Bachelorette featuring Kaitlyn Bristowe. Apart, there was a rumor that Ben had an on-screen romance with an actress, Tenley Molzahn. As of now, now, Ben is living a rumor free life with his fiancee, Jessica Clarke.

How Much Rich Is Jessica Clarke?

Well, Jessica might have earned a decent amount of money from her career. As she is also a co-owner of two fitness gyms which also help her to earn a large amount of fortune. But, still, we don't have exact information in her net worth figure. Besides, her Instagram account @jessclarke_ has a following of 193k followers. So, she might earn around $500-$1000 per post.

However, she is also popular as a fiancee of the American reality star, Ben Higgins. He has an estimated net worth of $1 million as of 2020. Apart, she came from a decent family so, she has been living a lavish life since her childhood.