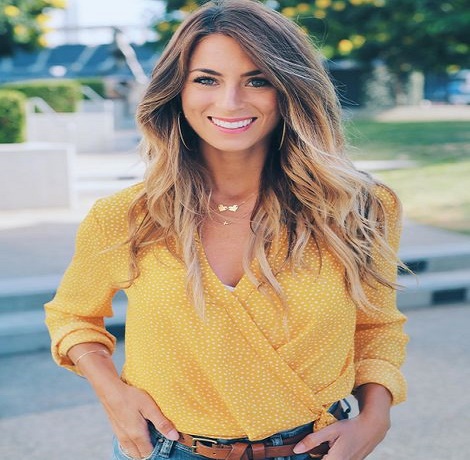 Yes, the Bachelor and Bachelor in Paradise alum find a new partner. He is none other than Taylor Leopold who is the co-founder of The DIY Cleanse. Husband and wife tied the wedding knot in a romantic outdoor ceremony on 27th April 2018 on Friday.

In January 2018, Molzahn announced the happy news of their engagement showing off her massive ring on Saturday with a post on Instagram:

“THIS IS HAPPENING!!! Last night I said yes to spending forever with him! My heart is gushing with happiness and excitement & I can’t stop thinking of how good God is!!!”

Actually, the bride and groom dreamed of a romantic backyard feeling, and when Molzahn met her wedding planner, Heather Balliet then, she immediately fell in love with her house and asked for a wedding at their home and thankfully they said yes too. The Backyard Wedding took place in San Marcos, California.

The TV personality , 33, on the wedding day, wore white tube crystal gown, while the groom wore a gray suit pant with white tie. Likewise, bridal dresses and earrings of the same brand, Lulus and bracelets from Juneau Luxe and Nashelle necklaces.

On the special day of this lovely couple, Tenley and Taylor's all family members including Taylor's mother, Danielle Leopold attended the party. Likewise, guests attending the nuptials also shared pictures of the New Window wedding pens and congratulated them as a newly wedded couple.

As per Tenley's Instagram post, the newly married couple went to Omni La Costa Resort & Spa in California for their romantic honeymoon on April 29 on Sunday. She claimed that Friday was simply the best day of their lives but yesterday waking up as his wife made it even better.

The Bachelor’s Tenley Molzahn was previously married to her former husband, Ryan Natividad in 2007. As per some wiki, the couple actually were not in love so after 15-month marriage they ended their relationship in 2008.

In fact with the news of Us Weekly, the "alleged" other woman claimed that Tenley isn't the good girl that she'd only allow sex once a week. Also, Latham said that she would not let him see his family with the Us Weekly.

Hence, this might be the actual reason behind their seperation. Further, they seperated without welcoming their kids from their uncolorful relationship.

Past Rumors and Love Affairs of Tenley

After divorce with Ryan, Tenley Molzahn's love affair with Jake Pavelka failed to fulfill her powerful relationship expectations. After this,  she became linked romantically to Kiptyn Locke and they also appeared as a boyfriend and girlfriend too in the public.

Once, there was a rumor that she had an on-screen romance with actor Ben Higgins and even claimed that Higgins "One of the Best Men I Have Ever Known."

Molzahn and Ben even met together on several occasions, although the fans seem to have every right to think they're dating, they're not. Besides Molzahn's ex-husband, Ryan Natividad is now engaged to his new girlfriend turned fiance, Christina Latham.

Tenley Molzahn is an American Reality star who has a  net worth of $700 thousand as of 2019. Likewise, her ABC reality shows The Bachelor has led to earn this considerable amount of money. Just like Tenley, Terricka Cromartie and Bianca Beets are also noted as a TV personality.

Also, Molzahn is famous for reality television shows including The Bachelor: On the Wings of Love(2010) and next on Bachelor in Paradise(2015). So, with longtime experience in the acting field, Molzahn might earn an average total compensation of $48,373 as an actress.