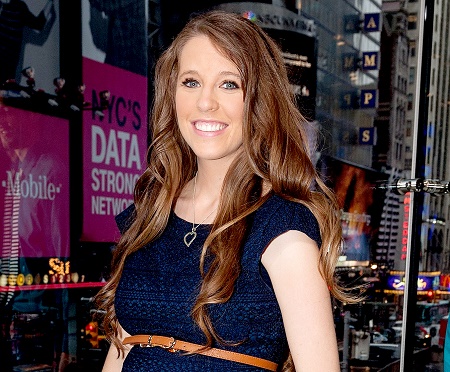 Jill Michelle Dillard is an American television personality who is best known for being part of the cast of TLC's reality show 19 Kids and Counting from 2008 until 2015. In addition to that, she has also starred in the next TLC show, Counting On (formerly Jill & Jessa: Counting On) from 2015 to 2017.

She was born on May 17, 1991, in Tontitown, Arkansas, United States. She is the second daughter of parents Michelle (Ruark) Duggar, and Jim Bob Duggar. She has 18 siblings, 8 sisters and ten brothers, all of whose names begin with the letter "J".  So far, she holds American citizenship and is of Caucasian ethnicity.

Married To Her Husband, Derick Dillard in 2014

Yes, Jill Duggar, 29, is a happily married woman. Today, she has been enjoying her blissful marital relationship with Derick Dillard, 31 for 6 years. He is a graduate of Oklahoma State University Oklahoma City (2007–2011).

Following a year of dating, they got hitched on June 21, 2014, at the Cross Church in Springdale, Arkansas. More than 1000 guests attended the wedding event. During a party, Jill 's dad supports her veil as she prepares to say "I do."

For their wedding day, the bride wore a traditional style of white custom satin and lace veil, while the groom wore a gray suit with a salmon tie. Before saying "I do," they finally got to share their first kiss in front of the crowd at the ceremony.

On that day, the five sisters of the bride served as bridesmaids, while two brothers sat as groomsmen. And her remaining sisters and niece served a flower girl, a brother and a nephew shared responsibility for the bearer, and five brothers were ushers.

Recently in early 2020, the married duo has celebrated the 6th year of marriage anniversary amid the COVID pandemic. From their marriage, they have two young kids named Israel David Dillard, 5, and Samuel Scott Dillard, 2.

Their First Meeting In Nepal

Yes, you read that correctly. Jill and Dillard met for the first time in Nepal when Jill went to visit there with her dad for a two-week trip in 2014. She volunteered at a birth center in Nepal. During her trip, Ms. Dillard realized that she and Derick had more in common and fell in love with him before meeting him face to face.

Then they started talking a lot, and they also even sent a text and email each other. That same month, they eventually met face to face on 7 November 2013 and began an official courtship. “We Skyped a lot. I got to know some of his friends and family". Duggar said during an interview with People.

"And then, we met in person months later. I was in love with someone I had never met in person", she added. Within a few months, after they first met, they announced their engagement news in March 2014.

Total Net Worth in Thousand Dollars

As of early June 2020, Jill Duggar Dillard has an estimated net worth of $400,000. She has earned her total amount of fortune throughout her TV career and various endorsement deals.

Besides this, Jill co-authored a book named Growing Up Duggar: It's All About Relationships, with her sisters Jana, Jessa, and Jinger. The book was released on March 4, 2014.