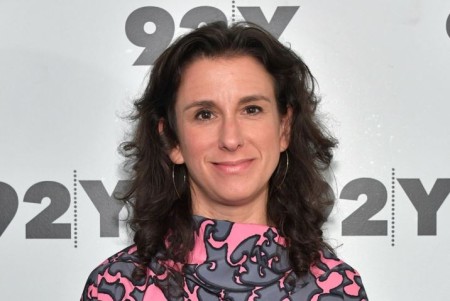 In late 2017, a movement called #MeToo began to spread virally on social media. The movement started after more than 80 women had made allegations against former film producer Harvey Weinstein. And the people who were responsible for exposing Harvey were reporters, Jodi Kantor, and Megan Twohey. Today we will know about Jodi and her professional achievements in the journalism industry.

The 45-year-old, Jodi Kantor is an American journalist who works as an investigative reporter at The New York Times. She is a contributor to CBS This Morning as well. Throughout her career, Jodi has covered subjects about the workplace, technology, and gender issues. She has won prestigious awards, such as the George Polk award and the 2018 Pulitzer Prize.

Jodi Kantor was born on April 21, 1975, in New York City, the United States. Born as American, Kantor belongs to Jewish ethnicity, and her grandparents were Holocaust survivors.

Kantor married her husband, Ron Lieber, in 2002. Like Jodi, her spouse is also a journalist. He writes the Your Money column for The New York Times. Further, Lieber is also a New York Times best selling author. Ron, who graduated from Amherst College in American Studies, previously wrote for The Wall Street Journal as well. He won the Gerald Loeb Award in 2011, 2018, and 2019.

As of 2020, Jodi and Ron have been married for nearly 18 years. The pair works in the same industry and has been successful on their respective career. Another reporter, Nikole Hannah-Jones, also has a joyful married life.

One of the well-known correspondent and author, Jodi Kantor, has a net worth of $5 million as of 2020. As an investigative reporter at The New York Times, Kantor earns an annual salary of over $150,000. The average salary of the reporters ranges somewhere between $90,000-$170,000 per year. Like Kantor, another prominent female media personality, Terry Gross owns a huge fortune.

Apart from being a reporter, Kantor is a best-selling author. Throughout her career, Kantor has written stories on several subjects, which has improved the situation of the nation. Meanwhile, her spouse, Ron, earns over $110,000 per year as a finance columnist.

Jodi Kantor Books: She Said and The Obamas

On September 10, 2019, the Penguin Press published a book called, She Said: Breaking the Sexual Harassment Story That Helped Ignite a Movement. Jodi, along with Megan Twohey, wrote the book that ended Harvey Weinstein's career.

Previously in 2012, Kantor published a book, The Obamas, which chronicled Barack Obama and his wife Michelle Obama's time at the White House. The book was said to be insightful and rich with details.

The #Me Too Movement

Jodi and her partner, Megan, exposed powerful and wealthy sexual predators to account for long-suppressed allegations of brutality and harassment. The phrase Me Too was initially used in 2006, but after the exposure of Weinstein, the movement spread virally as a hashtag on social media.

Watch Jodi and Megan about #Me Too movement!

A number of high-profile female celebrities and other women opened about their sexual harassment stories. Jodi and Megan were named Time magazine's 100 most influential people of the year. Likewise, they won the 2018 Pulitzer Prize for Public Service.